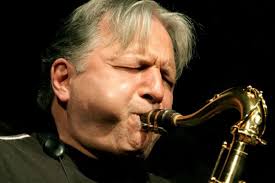 This May, Young Sounds was fortunate to have renowned tenor saxophonist Jerry Bergonzi join us for our Guest Artist Program! Mr. Bergonzi’s career has spanned more than four decades. He studied at Lowell University, toured the world with The Dave Brubeck Quartet and actively records, performs and teaches master classes. In addition, he has been teaching improvisation to instrumentalists and vocalists at the New England Conservatory of Music since 1995. Our students were thrilled to have the opportunity to work with him!

Mr. Bergonzi gave an hour and a half long master class (which was free and open to the public), in which he began by writing down questions from the participants. He then utilized the remaining time to answer those questions. This allowed the participants to shape the discussion and made for an interesting, informative and motivating afternoon. Young Sounds students then spent 2 hours rehearsing songs with Mr. Bergonzi, to be performed the following day. It was such a great opportunity for our students to work closely with Mr. Bergonzi. They had the opportunity to see him at work, take his advice and begin to understand his sense of time.

On May 8th, our 3 bands played dynamic performances to a full house at The Kerr Cultural Center, with the 7 O’clock Band featuring Mr. Bergonzi on two of his original songs, “Committed” and “On the Brink” which the students had worked on for several weeks in preparation for Mr. Bergonzi’s visit. Our 5 O’clock Band featured him on the Latin tune “Havana Holdout”, and our Combo Band featured him on “In a Sentimental Mood”. Our students performed with energy and enthusiasm, and guests were delighted to hear them together with Mr. Bergonzi. Their growth during this past season was evident during the performance, as was their commitment to the music. A congratulations is in order to our students and certainly to our Director, Andrew Gross and Assistant Director, Doug Robinson! Young Sounds is fortunate to have such a dedicated team at the helm!

To close the evening, guests were treated to a quartet performance with Nick Manson, Chris Finet and Dom Moio, which featured Mr. Begonzi. This years’ Guest Artist Program was a great experience for all and continues to be a favorite among Young Sounds’ members.