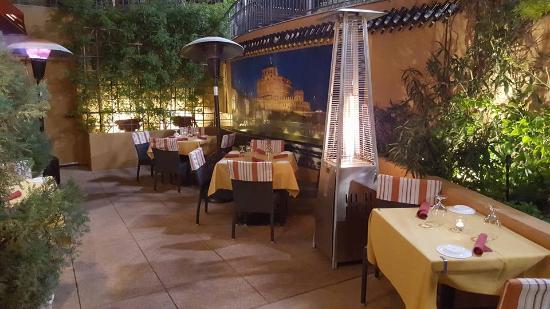 Marcellino’s Ristorante is a European-style Italian restaurant in the heart of downtown Scottsdale that also offers two nights of live music. Chef-owner Marcellino Verzino and his wife, Sima, believe strongly that live music enhances dining. Music-with-dining is a valued combination in Europe and New York City, where they have lived. “Not enough restaurants have live music, but we believe it’s important for a fine-dining experience,” says Sima.

The couple’s cordial conviviality is an enhancement at Marcellino’s, which opened at Scottsdale Southbridge in 2010. Marcellino’s music on Thursdays has a mellow jazz focus, while Saturday’s sounds combine jazz and contemporary sounds. Performers include the duos of vocalists Monte Procopio or “Lady Kari” Shaff with pianist Dave Ihlenfeld, saxophonist Jerry Donato with pianist Peter Zale and others. On select Thursdays, patrons can hear the funky R&B and jazz stylings of “Strictly Sima” with her trio of pianist Mark DeCozio, bassist Felix Sainz and drummer Sheila Earley.

A flowing Italian-style fountain, hand-crafted by the chef from 49 (empty) wine bottles, is a dazzling sight on the front patio and from the candlelit dining room, which Marcellino also designed and constructed.

Varied seating options are offered: tables in the spacious main dining room, U-shaped Chef’s Island for tasting menus, intimate velvet-draped table-for-two in the Chef’s Cove, a private dining room, an L-shaped bar and two umbrella-shaded patios with misting systems. The Roma patio in front has the waterfall and a large mural of Castel Sant’ Angelo in Rome created from the chef’s personal photograph. The Garden patio has seating under olive trees in large urns for a piazza-like setting with the nearby twinkling lights of the classy Scottsdale Waterfront.

Chef Marcellino was born on his family’s farm in the Campania region of Italy. After the passing of his mother, Carmela, he began cooking at age 11 for his father and sister. At 20, Marcellino began to open restaurants in summer vacation spots in various regions of Italy, and later his own bistro in Rome, where he and Sima met. The pair later moved to her New York City birthplace.

During the seven years that Marcellino was a chef-partner for new restaurants there, he won the New York Times’ Award of Excellence, as well as recognition for his contribution to the James Beard Foundation. Since relocating to Arizona, his restaurant achieved a five-star rating from The Arizona Republic.

After assisting her husband to create Marcellino Ristorante in Scottsdale and contracting the live music on Thursdays and Saturdays, Sima has rekindled her longtime musical career. She performs a combination of jazz and funky R&B at the restaurant two Thursdays a month.

“I grew up on music in New York City,” Sima says. “My father played in jazz and pop orchestras. I studied dance and piano, attended the high school of performing arts and worked with voice coaches. In my teens, I was singing jazz, pop and R&B with society orchestras and in off-Broadway shows.”

Sima also loved writing, and graduated college with a degree in communications-journalism. But her deep interest in music prevailed, and soon she was singing jazz, pop and R&B hits with orchestras on international cruise ships. That led to a European recording contract and 10 years of performing American dance music in bistros and discos in Rome, including the legendary Jackie O’s.

“I felt I had come home,” she remembers her time in Rome, and she taught herself Italian in three months. When she joined a group of friends for a New Year’s Eve dinner at Marcellino’s restaurant in Rome, she says, “I was single and fine as wine.” Then he kissed her at midnight “and that’s how it began” for their marriage of 20 years.

“Marcellino Ristorante is all about excellence in a complete experience for diners,” says pianist Ihlenfeld, who has played there five years. “It does not surprise me that they want to differentiate from other fine-dining places in Scottsdale by having live music. We get a lot of positive feedback from people who love the music and what it adds to their dining experience, and who sometimes share their memories associated with a tune we’ve performed.”

DeCozio adds, “Sima has chosen ensembles that blend in seamlessly with the atmosphere. The restaurant’s audio system evenly distributes the sound, so people can hear the music from different vantage points but aren’t bombarded by it anywhere.”

Procopio has performed on Saturdays for six years, and for special restaurant events. “I do the classic songs of the old masters – Frank Sinatra, Tony Bennett, Nat King Cole – and also the hits of their contemporary counterparts,” he says. “The venue has a very effective sound system that allows the performers’ music to fill the inside as well as the outside dining patio in a balanced and unobtrusive way.”

To vocalist Shaff, “Marcellino and Sima are lovers of all things fine. She is a performer herself, and she knows that live music adds to fine ‘old-school’ dining in a modern atmosphere. I do the 1930s and ’40s songbook — Rodgers and Hammerstein, Cole Porter, Hoagy Carmichael and the Gershwins.”

Zale adds, “The food is a big deal there, so we’re not the stars; the star is Marcellino’s food. Jerry and I play a mix of jazz and soft, high-quality music to go with the great food. It reminds me of Mary Elaine’s (The Phoenician Resort’s former fine-dining restaurant).”