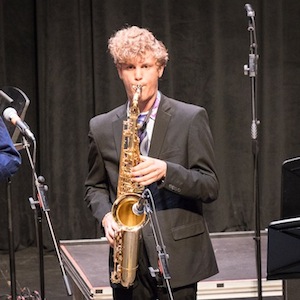 Scholarships totaling $6,500 have been presented to six members of The Young Sounds of Arizona. The non-profit organization for talented high school jazz musicians was created in 1971, and has been continuously sponsored and funded by Professional Musicians of Arizona, Local 586 AFM. In addition to awarding scholarships, Young Sounds pays full tuition costs for all student members who wish to attend metro-Phoenix area summer jazz camps and workshops. The scholarship winners were announced June 7 at The Young Sounds of Arizona’s final concert of the school term, presented at the Mesa Community College Performing Arts Center. The winners are:

·      Chris Clements, trombonist in the 7 O’Clock Band: $1,000 Gary Carney Scholarship. Chris just graduated from Thunderbird High School and will be a music student at William Paterson University next year.

Addendum: Earlier interviews with Nakamoto, Dugan, Clements and Weiss are archived on this website.

** FootNotes: The Young Sounds of Arizona was created in 1971 by the Phoenix Musicians Union, and it remains the ﬁrst and oldest program of its kind in the nation. Young Sounds is comprised of students between the ages of 13 and 18, from schools throughout the metro-Phoenix area. All members are selected by audition and are considered to be the best young talent that the Valley has to offer. Young Sounds is a non-proﬁt 501(c)(3) organization, governed by a volunteer board of directors and sponsored by the Professional Musicians of Arizona, Local 586 AFM. Performances and direct expenses for the organization as well as an annual college and jazz camp scholarship program are paid for by the Young Sounds organization. In addition to these programs, Young Sounds sponsors a variety of clinics by noted performers and educators. The union also presents local musicians in free concerts from 7 to 9 p.m. on the first Tuesday of each month, open to the public in the comfortably inviting and musically decorated Musicians Hall in Phoenix; all donations go to The Young Sounds of Arizona. The hall is at 1202 E. Oak St., Phoenix 85006, 602-254-8838.