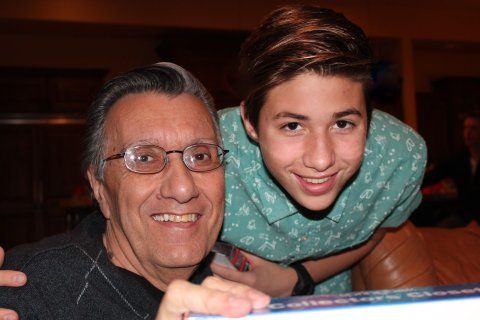 This semester’s first public performance of The Young Sounds of Arizona will be at 7 pm Wednesday, Dec. 3, during a concert featuring both the Mesa Community College Jazz Band and Jazz Fusion Band.  Admission is $10 ($5 students) in the newly opened Mesa Community College Performing Arts Center, 1833 W. Southern Ave, Mesa 85202, 480-461-7887, www.mccpac.com YSA has been under the sponsorship of the Phoenix Musicians Union, Local 586 AFM, since 1971. The union continues to present local musicians in concert on the first Tuesday of each month, free to the public in the union hall, 1202 E. Oak St., Phoenix, 602-254-8838. The MCC center was a repurposing of a former Harkins Theatre Complex on Longmore Street I Mesa. The adaptive reuse and expansion of the vacant movie house became a 450-seat venue for arts performances. In addition to the main theater, the renovation created classrooms, music practice spaces and faculty offices, plus a lobby-space performance area and courtyard. The architecture of the building was inspired by the musical structure of cherished songs, such as the north masonry wall folded along an ascending diagonal line to represent the opening clarinet glissando of “Rhapsody in Blue” by George Gershwin. More information, MCCbands.com

Former Phoenix pianist Rachel Eckroth is playing in the band of the “Meredith Vieira Show,” seen locally at 11 a.m. weekdays on Phoenix channel 3. The quintet, which features three other female musicians, is led by Everett Bradley, a percussionist-backup vocalist who was in Bruce Springsteen’s E Street Band and who has performed on Broadway. The show is taped at 30 Rockefeller Center (30 Rock) in New York City that’s also home of “The Tonight Show Starring Jimmy Fallon” and “Late Night with Seth Meyers,” both of which air weeknights on Phoenix channel 12.

The fourth annual Tom Miles Scholarship Celebration was organized and staged on Oct. 28 by Jerry Donato, Doug Robinson, Jack Radavich and other members of the Phoenix Musicians Union. The afternoon event raised funds for scholarships for Young Sounds of Arizona and other young jazz musicians at Pranksters Too in Scottsdale. It featured a non-stop lineup of top Arizona musicians, including Armand Boatman, Nicole Pesce, Auggie Mendoza, Jim Nistico, Tom Williams, Tim Downs, Cleve Huff, Bridget Maynes, Kristin Maynes, Donatoand Radavich. Miles was a metro-Phoenix trumpeter who died in April 2011. He had toured with the bands of Tommy Dorsey and Woody Herman, was music conductor for the Ice Capades (including Japan), and played lead trumpet in Phoenix bands that backed touring stars such as Stevie Wonder and Ray Charles. See my review at www.MusicSceneAZ.com – my new website with concert and venues listing, along with numerous articles in the News segment.

A feature article about Charles Lewis, in tribute for his 81st birthday, was written by Arizona State University journalism student David Marone: downtowndevil.com/2014/09/24/61071/jazz-pianist-charles-lewis-celebrates-birthday/

Lewis Nash, an alumnus of Young Sounds of Arizona who has become a global jazz star since moving to New York City in 1981, is the drummer on “Duologue” that features him and saxophonist Steve Wilson. This duo sound reminded me of hearing Nash and alto saxophonist Allen Chase as student-musicians performing the ASU Music Theater in the late 1970s. It was a daring concept back then that was fully satisfying, and is again in the 21st century. Nash honed his percussive skills while an ASU student, performing in clubs with pianists Charles Lewis and Keith Greko, often at the Hatchcover, a hot jazz venue in downtown Scottsdale. Another nearby jazz venue was the Fat cat Club owed by drummer Ed Ravenscroft, now deceased. His pianist-brother Bob Ravenscroft continues to perform and also to assist local jazz projects through his longtime Jazzbird Foundation, that had its origins in his live-music Jazzbird Studio on Buckboard Trail in Scottsdale (now an area of restaurants and bars with ear-pounding “house music”).

A celebration of life for longtime Arizona Classic Jazz Society member Dick Leopold will be held at 10:30 a.m. Sunday, Nov. 9, at the Crowne Plaza San Marcos Resort, 1 San Marcos Place, Chandler, in LaVentana Room during the annual festival (Nov. 6-9). It will feature the Wolverine Jazz Band that Dick co-sponsored this year; the family is creating a donor-advised fund for a four-year college music scholarship, administered through Arizona Classic Jazz Society; donations may be sent to ACJS, 10918 E. Michigan Ave., Sun Lakes, AZ 85248.

Diana Krall’s Nov. 7 concert in Phoenix has been cancelled due to her serious illness. Krall’s website announcement stated “ongoing complications brought on by pneumonia.” The five-time Grammy Award winner postponed her scheduled album release, and US Fall Tour. Her new studio album, “Wallflower” (Verve Records), was due for North American release on Oct. 21, and the national leg of her “Wallflower World Tour” was to kick off in Phoenix. “Wallflower” now is set for release on Feb. 3, 2015, after her condition became more chronic than anticipated. Upon the advice of her doctor, she will be unable to travel or do promotional or touring activities for another two months to assure her full recovery. “I’m deeply saddened that I will have to postpone the release of my new album ‘Wallflower” and the Wallflower U.S Fall Tour until next year,” she stated on the website. “I’ve been battling pneumonia and am under doctor’s orders to rest for the next few months in order to regain my strength and good health. Performing is both a privilege and a joy for me. When I go out on stage, I want to be able to give it everything. Taking this time to rest and recuperate will allow me to do that. It is frustrating to be so close to the record release and have to delay, but I am very proud of this record and want to be able to give you all my very best when we finally present this music to you. Thank you so much for your understanding.” New tour dates for the “Wallflower World Tour” will be announced in the coming weeks at www.dianakrall.com

Bob Corritore’s  Southwest Musical Arts Foundation is soliciting donations to help fund a CD release of collaborative recordings from blues-piano legend Henry Gray and award-winning harmonica player Corritore. The release, to be titled “The Henry Gray-Bob Corritore Sessions: Blues Won’t Let Me Take My Rest,”will be tracks culled from numerous sessions recorded from the early 1990s through the early 2000s. Included in these sessions are other blues notables such as Robert Lockwood Jr., John Brim, Willie “Big Eyes” Smith, Bob Margolin, Chico Chism and more. On Jan. 19, Henry Gray will be 90 years old, and the album is expected to be released album in the early part of that year. Many years of sessions will be reviewed and prepared for release, and donors of $15 or more will receive advance copies of the CD, the funds helping to pay for studio time. Also, the Argentina blues magazine Con Alma De Blues featured an interview with Corritore in October.

Nancy Gee and her husband Bill General, who have relocated to New Haven, CT, are reconnecting with family and high school friends in nearby Bramford, where Nancy was born and raised. Nancy phoned me to reiterate her heartfelt thanks to the musicians who performed and the friends and fans who attended her farewell-benefit at The Nash in late June, raising funs to help with their relocation expenses. The couple is living in a modern high-rise apartment building with a view of the Quinnipiac River and the metropolis.

Quotable: “It takes an intelligent ear to listen to Jazz.” – Art Blakey