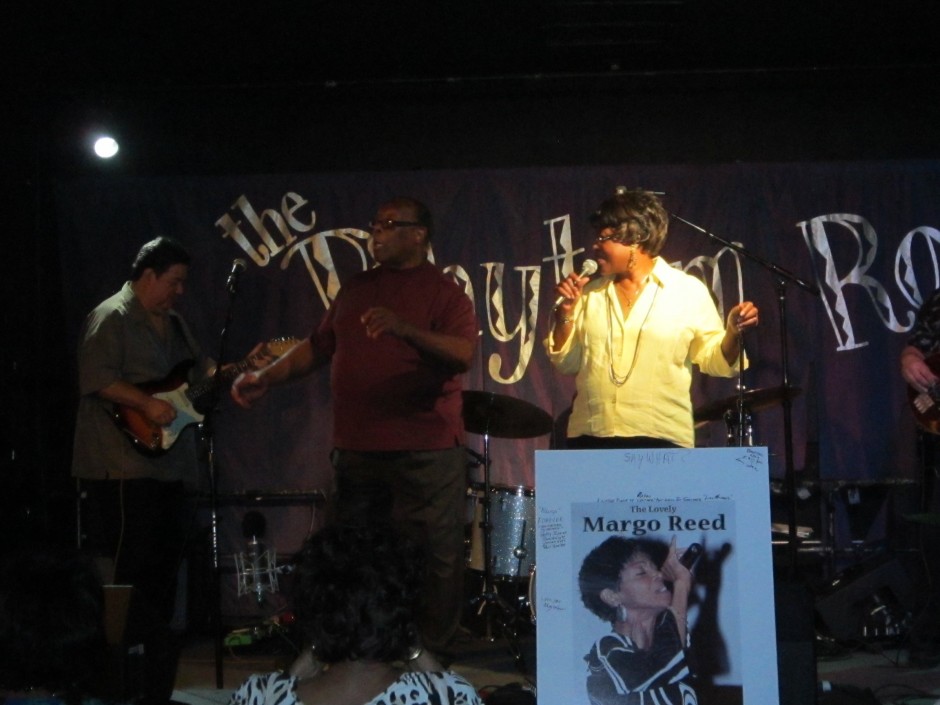 Local jazz, blues and Motown musicians celebrated the life of vocalist Margo Reed on Saturday, May 2, 2015 at the Rhythm Room in Phoenix, playing for a standing-room-only audience of more than 200 that even filled the outdoor patio.

Highlights of the 4-1/2 hour event were Dennis Rowland’s rendition of “For All We Know” enriched by Devon Bridgewater’s violin accompaniment, and Jim Henry’s trumpet and vocal-scat treatment of “Exactly Like You,” also Alice Tatum singing “Somewhere Over the Rainbow,” George “Pepe” Grant’s crooning “The Nearness of You” and Renee Patrick’s tender version of “Smile,” all three accompanied by Judy Roberts on keys.

When Francine and her Arizona band led by bassist Andy Gonzales took the stage, the energy level increased exponentially. Francine declared, “We’re not going to do any sad songs,” and introduced “Let the Good Times Roll” and then performed her requisite trademark song, “Wild Women Don’t Get the Blues.” Both Michael and his daughter Tabitha each sang, then Margo’s daughter, Margo Sherri, came forward to thank everyone for their presence and support of the Reed family.

The following night, Michael and Francine hosted a family tribute to Margo at the Soul Café in north Scottsdale. Michael and Tabitha perform there on Fridays with “The Usual Suspects Band” of Kenny Poe on keys, Johnny Carrasco on guitar and Joe Costello on drums. All three Reeds sang fan favorites: Michael’s were “Lady Love,” “What a Wonderful World” and “My Funny Valentine” (The Reed Family Anthem). Francine chose “Love in Need,” Don’t Get Around Much,” “Wild Women” and “Evil Gal.” Tabitha sang “Got to Be Strong,” “Your Heart is as Black as the Night” and “What Do I Do with Me?” The trio Street Life, who perform Saturdays at the restaurant, played during the break, featuring vocalist Dorothy Tobin with brothers Lucius and Lamar Parr on guitar-vocals and bass. Soul Café owner Sheila had announced she would donate 20 percent of sales that night to the Reed family, and then she doubled that donation..

Michael Reed has produced a compilation CD of Margo favorites, also a two-hour DVD of video clips of Margo performing through the decades that also includes a new documentary of her life, available by email to ReedThis44@yahoo.com.

Commentary: Seeing that the website designation for the New Orleans Jazz and Heritage Festival is nojazzfest.com makes we want to point out that the 2015 version was even less pure jazz than in long past models (since its inception in 1970). Many (too many?) acts booked were straight-out pop and rock bands, with no resemblance to the jazz genre despite its many varied forms. Those “headliners” included The Who, Jimmy Buffett, Keith Urban, No Doubt, Pitbull, Stevie Winwood, John Legend and Lenny Kravitz.

While I champion the continuation of the festival’s gospel tents and Native Nations Intertribal Folk Life Village, and I recognize the significance of 88-year-old Tony Bennett’s coalition with the highly music-talented Lady Gaga, it’s sad to see that the touted “stars” of this festival are the previously named acts. Although there is still plenty of New Orleans-style jazz and gospel music, but maybe it’s time that this festival be retitled the “New Orleans Music Festival” (rather than my initial inclination for “No-Jazz Festival”). The same might be said of the Playboy and Montreux (Switzerland) jazz festivals also to be retitled with a less misleading name of “music festivals.”

Also, in my long-held opinion, “smooth jazz” isn’t jazz at all; it’s contemporary music that uses some of the same instruments and some of the same notes but that are overly electronically enhanced and amplified.

AZ Jazz News: Among those in Paris, France, to experience all that greatness of International Jazz Day on April 30 was longtime jazz activist Karen Scates of Phoenix. It was her fourth consecutive such day, last year going to the host city of Osaka, Japan, and in 2013 to Istanbul, Turkey, after attending the inaugural event in New York City. She is affiliated with the Thelonious Monk Institute, a partner with UNESCO for International Jazz Day since 2012.

Here’s new hope for pop music via Lady Gaga, Bruno Mars and Sam Smith nudging the genre back to being melodic and away from screaming noise. Nancy Sinatra’s daughter, Amanda, told ConfidentI@l that her grandfather Frank “would have loved Gaga. She’s got chops. She respects the songs. I know he would’ve liked Bruno Mars and throwback artists like that. He’d love the multi-faceted triple-threat aspect of it. He loved people who don’t take talent for granted and do the work.”

Overheard: “No singer I have experienced on the local level lived the songs they sang to the degree that Margo Reed did. Equal to Billie, Frank and Carmen.” – Peter Coppock, former NPR radio jazz deejay in Chicago.

Quotable: I can only hope that one day America will recognize that our indigenous music, jazz, is the heart and soul of all popular music, and that we cannot afford to let its legacy slip into obscurity.” — Quincy Jones.