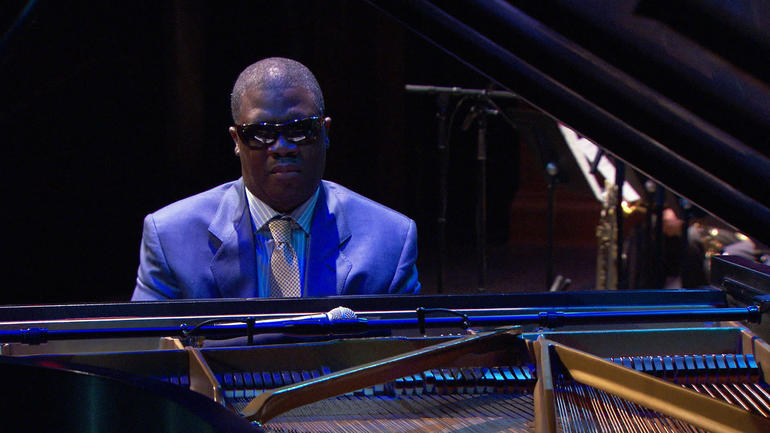 Amid the conflicts and accusations of this Presidential Election year, it’s important to note that jazz is essentially non-political regarding party affiliation and support. “The art form itself takes no sides on matters of political philosophy or social policy,” stated writer Douglas Groothius a year ago, when the activity already was well underway.

However, historical perspective does show that some musicians have expressed concerns and woes via their compositions and recordings, such as Billie Holiday’s “Strange Fruit” and Max Roach’s “We Insist.” Now a new one has been added to those legendary recordings, an EP issued in February by pianist Marcus Roberts, “Race for the White House.” He musically explored the personas of four of the candidates of this year’s election cycle. The tracks include “Making America Great Again (All By Myself)” [Donald Trump], “It’s My Turn” [Hillary Clinton], “I Did Chop Down That Cherry Tree” [Ben Carson] and “Feel the Bern” [Bernie Sanders].

The song for Trump features a whistle, which Roberts said in an interview with NPR radio, “That symbolizes Donald just looking over his vast estate and just chilling and just having a great time. And then the trumpet interrupts him just to make a bold statement of ‘I’m going to make America great again, all by myself.’ ”

Roberts says he was inspired by the unique personalities of the presidential hopefuls, and the challenges they face in communicating with potential voters. “It’s almost like you have to get into other people’s experiences so that they can see their experience in you, and vice-versa,” he says. “And I think that’s a very important component of what’s going on right now in America. I think everybody wants to feel like they’re being understood and related to, as opposed to preached to or told what they should think.”

Because Roberts lost his sight at age 5, he’s never seen these candidates. But, he said, “You can learn a lot about politicians by listening to them, things you might miss just looking at them. If a person is nervous, they might talk a little faster or, if they’re really in command, they may project more of a louder voice,” he said. “If they’re really happy, they might use a higher pitch. There’s a lot of information there when you hear people talk.

“You can’t turn on the television without some daily update on these various candidates, and there just seems to be such a difference in every character,” he told New Yorker magazine. “They all have different personalities, temperaments, voice, rate of speed. It dawned on me that it would be interesting to try to capture a little bit of that in music.

“Jazz musicians, you know, we improvise, we make stuff up. We’re kind of a lot like these candidates when they’re at these town halls. When they’re being interviewed, people ask you all kinds of crazy stuff and you’ve got to think quick on your feet. So I thought it would be kind of cool to try to write some music that would in some way describe these personalities.”

The Buzz: “The Season” is here again, offering a multitude of live-music events in each of the next six months, when local attendance is supplement by winter-season residents and visitors. All the cities’ arts centers have announced annual series lineups, and there’s revived action at locations that were on summer hiatus, plus new bookings in ongoing weekly series at regular venues. All are listed in the Calendar section of this monthly Update, also posted on my all-Arizona music website, www.MusicSceneAZ.com.

Highlights of the season include a rare Arizona concert by Jimmy Heath, the 90-year-old saxophonist performing with the Tucson Jazz Institute Ellington Band in its CD release concert on Nov.14 at the Fox Theatre in Tucson. The evening also includes the premier of Bret Primack’s documentary film about Heath, “Passing the Torch.” The date has been designated as “Jimmy Heath Day” in Tucson. Also ahead, a Nov. 15 date for the Chucho Valdez-Joe Lovano Quintet at the Musical Instrument Museum in Phoenix, and the next night singer Karrin Allyson performing for an impressive start to its new season.
A special Veteran’s Day tribute on Nov. 11 will be “Bob and Bing’s Road to Victory,” a USO-style show created by and featuring Lynn Roberts as Bob Hope, Bob Pasch as Bing Crosby, and Renee Patrick as Ella Fitzgerald, at the Higley Center for the Performing Arts. Patrick also continues to perform her trio tribute to the Ink Spots, the legendary group that featured her father, the late George “Pepe” Grant.

Among other events is the resumption of the Lakeshore Music series at the Tempe Center for the Arts, launching Nov. 19 with the Omar Sosa-Joo Kraus Duo, the concverts continuing monthly through May. The season also offers numerous performances by Arizona State University student ensembles on campus, many of them free, as are those of the metro-Phoenix area’s many community college performances.

Musicians’ News: Two blues performers, Eric Ramsey and Sistahs Too, will be representing the Phoenix Blues Society and Arizona at the International Blues Challenge in Memphis, Tenn., in January.

The annual Tom Miles Scholarship event, again organized by members of the Phoenix Musician Union, recently raised $1,500 for a total of $11,500 donated to the fund at Mesa Community College during the past five years.

“The Bobs of the Blues” (Bob Margolin, Bob Stroger and Bob Corritore) will deliver Chicago-style blues during four gigs in France with French drummer Simon Boyer:

Nov. 3-4 at the elegant Jazz Club at Le Meridien Hotel in Paris; Nov. 5 in Grande Synthe, France, for the Bay-Car Blues Festival; and Nov. 6 in Yvelines, France, for the legendary Blues Sur Seine Festival.

Arizona’s favorite snowbird-songbird, Judy Roberts, flies here in early November, to perform in at least three weekly venues: Sundays at The Hills Pizza and Desserts Café in Fountain Hills with bassist Neal Seroka (who’s there Tuesday nights), Mondays with Renee Patrick at Malee’s Thai Cusine in Scottsdale, and Tuesdays at Eddie V’s in Scottsdale. She’ll also perform a “Chicago Jazz Jamboree” with pianist-vocalist Danny Long in March at the ASU Kerr Cultural Center in Scottsdale, part of a four-month series that starts in January, co-sponsored by Jazz in Arizona.