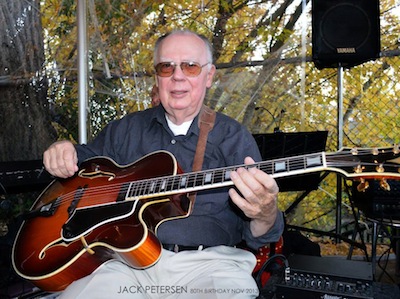 A highly inventive guitar trio will perform exciting improvisation on jazz standards on July 5, a concert that promises to deliver aural fireworks to rival the previous day’s sky-high pyrotechnics. What I’m calling “The Great Guitars of Arizona” will feature the astounding sounds of Howard Alden, Jack Petersen and Madelyn Roberts, performing a free concert from7:30 to 9:30 pm Tuesday, July 5, at the Phoenix Federation of Musicians Hall, 1202 E. Oak St., Phoenix 85006, 602-254-8838.

Alden is a world-renown musician and Concord Recording artist (since the late 1980s) who last year relocated from New York City to central Arizona. He began playing guitar at 10, inspired by recordings of Louie Armstrong, Count Basie and Benny Goodman, along with those of guitarists Barney Kessel, Charlie Christian, Django Reinhardt and George Van Eps. Before he was out of his teens, he was playing professionally around Los Angeles in groups ranging from traditional to mainstream to modern jazz. After moving to New York City, he played all the guitar solos on the soundtrack of the 1999 Woody Allen movie “Sweet and Lowdown,” and coached actor Sean Penn for his role as a jazz guitarist. Alden continues to tour internationally, also has had local performances.

Roberts has led and performed with multiple local jazz groups, from Dixieland to blues, bebop and beyond. She is known as being as unerringly inventive with six strings as with a pool cue — she was founder and first executive director of the Women’s Professional Billiards Association. Her earliest guitar mentor was her father, the late Howard Roberts, a virtuoso session player who created the opening notes of “The Twilight Zone” theme, “Gilligan’s Island” theme and his contributions to the soundtracks of many other TV shows and films, as well as in jazz education.

More “Arid-zona” summer action continues July 12 with Lyle Lovett and His Large Band at the Mesa Arts Center (featuring Francine Reed, again living in Phoenix/ touring with the band), followed on July 22 with Robert Cray at Talking Stick Resort, Scottsdale. See more dates on my website, MusicSceneAZ.com that has a Search option in the Calendar section to find musicians, venues or who is where on a specific date.

New dates have been announced for the 15th annual Prescott Jazz Summit Festival, changed from mid-August to Sept. 30-Oct. 2. There also are new venues, including the Yavapai Community College theater for all of the Saturday events. Those include educational sessions and a Gala Big Band Concert in the evening; tickets on sale via the college website, ycpac.com.

The Buzz: Sam McAllen Jr., a Boy Scout with Troop 446 in Scottsdale, chose the Arizona Music and Entertainment Hall of Fame (AMEHOF) as the beneficiary of his Eagle Scout Project.  He approached the board of directors with his idea of constructing two large custom display cases to display memorabilia and recognize the accomplishments of inductees. On May 30, after a dozen volunteers donated 180 hours of labor with Sam, two display cases were delivered to The Hall (7919 E. Hayden Road in Scottsdale), an entertainment venue and exhibit space of local music inductees and memorabilia. Asked to choose an inductee for one of the cases, Sam said, “Steven Spielberg because I have enjoyed his films and felt he needed to be recognized by having his own display case. I later learned that Mr. Spielberg was an Eagle Scout, which confirmed that I made the right choice.” Later this summer, Sam will go before an Eagle Scout Board of Review that will evaluate his project and other Scouting accomplishments to determine if he has earned the rank of Eagle Scout. He recently graduated from Saguaro High where he performed in the school’s production of “The Lion, the Witch and the Wardrobe” and sang with the Saguaro High School Vocal Ensemble at Carnegie Hall in New York City; he also was captain of the school’s track team.

Sound engineer Jack Miller, 83, Arizona’s “Father of Audio” whose career took him from mono to stereo and analog to digital recordings, died May 14 in Phoenix. He was involved in the recordings of more than 4,000 albums in all styles of music. His early Phoenix work was with Floyd Ramsey’s Recording Studio, then he was with RCA in Los Angeles, then opened his own Phoenix studio for Jack Miller Productions. At Ramsey’s, he worked on Duane Eddy’s “Rebel Rouser” with Lee Hazelwood, who provided a 2,100-gallon water tank to create what became known as an echo chamber, later dubbed the “Phoenix Sound” (it hadn’t been heard anywhere before). At RCA, Miller worked with Henry Mancini, The Rolling Stones, The Limelighters and The Monkees. Returning to Phoenix, he joined Audio Records, then in 1978 established his own studio. He also was a sound engineer for Canyon Records for Native American recordings, winning a Grammy and two gold records for R. Carlos Nakai’s “Earth Spirit” and “Canyon Trilogy.”

Miller was the sound engineer in 2009 for the Nadine Jansen double CD, “The Very Best of Nadine Jansen,” a 73-minute, 16-track audio retrospective of her five-decade career. He was this posthumous tribute album’s co-producer with Arizona music historian John Dixon and me. The music was excerpted from her three vinyl albums and a later cassette release, along with previously unreleased acetate records, reel-to-reel tapes and cassette tapings from Miller’s valuable archives. Jansen was renowned for playing piano with her left hand and trumpet or flugelhorn with her right at the same time, also for her lustrous vocals. Her flugelhorn and a performance video are part of the “Women in Jazz” exhibit at the Musical Instrument Museum in Phoenix. The CD is still available for purchase, $20 by mail, checks written to Young Sounds of Arizona with memo for the tax-deductible Nadine Jansen Scholarship Fund; contact me via my website, www.MusicSceneAZ.com

When it comes to “Unforgettable” in jazz, another name in my memory is Seymour “Sy” Gordon, who played trombone and bass trumpet until his death at age 98 in late May. For years, while working a day gig for Oscar Meyer, he led a quartet he called “Sy Gordon’s Music a la Carte” that performed for private parties. Raised in Brooklyn, he retired to Mesa with his wife Frieda, and found local musicians for his quartet. I met him when I was Lifestyle editor of the Mesa Tribune and wrote a weekly entertainment column that included lots of jazz news. One day Sy showed up at the newspaper office, asking to “meet that hip jazz chick”. He was full of charm and brought his trombone to play a riff for me, which he did, as surprised newsroom guys and gals grinned from ear to ear about my “new beau.” Of course, I wrote a feature on Sy for my section, and still have it in “favorites file” of my career archives. Years later, he called to tell me that he had joined the Sun Lakes Big Band and was its lead trombonist — at age 82! He remained in that role until he was 96, when he and his second wife, Sally, moved to a Wyoming retirement home. There, Sy continued to practice daily on his two horns, playing in regular jam sessions until a week before he left this Earth to join Gabriel’s brass section in The Great Big Band in the Sky.

My past year’s writing about jazz again has won national and regional awards in the category of Specialty Writing for two sets of reviews, “Duke Ellington Legacy Orchestra” and “Cassandra Wilson’s Celebration of Billie Holiday”/“George Benson and Phoenix Symphony”/“Jazz at Lincoln Center with Wynton Marsalis” ), plus a third award in Column Writing for “Riffs.”

Here’s a sort of music-related anecdote reported by Peter Kasperski, owner of Kazimierz World Wine Bar in Scottsdale (where I organized three years of Monday night jam sessions for Margo Reed and Friends). The story is that a staff member was working the door at Kazimierz a few years ago when Charles Barkley walked up.  After being told he didn’t have to show an ID or pay the cover, Barkley asked the staffer his name. “Saul, but they call me Tito.” Then Charles replied, “Like the Jacksons? So you’re the long lost missing Jackson brother!”  No wonder we still love the wit of Sir Charles.

Musicians’ News: Phoenix-born drummer Lewis Nash is part of the Houston Person sextet for the HighNote album, “Something Personal.” New York-based Person, 81, is a master of the bluesy big-toned and breathy tenor saxophone sound of Gene Ammons, David “Fathead” Newman, Ike Quebec and Stanley Turrentine. Some of Person’s 70-plus albums were with vocalists such as Lena Horne, Lou Rawls and Etta Jones. Among his notable instrumental issues was the 2003 HighNote duo album “Dialogues” with bassist Ron Carter, for which I wrote the liner notes. For this newest instrumental album, Person chose Steve Nelson on vibes, John diMartino on piano, James Chirillo on guitar, Ray Drummond on bass and Nash at the drums. The album offers familiar standards in a satisfying swing mode that’s amplified by Nash’s stylish and selective groove.