Riffs: Music news from out and about 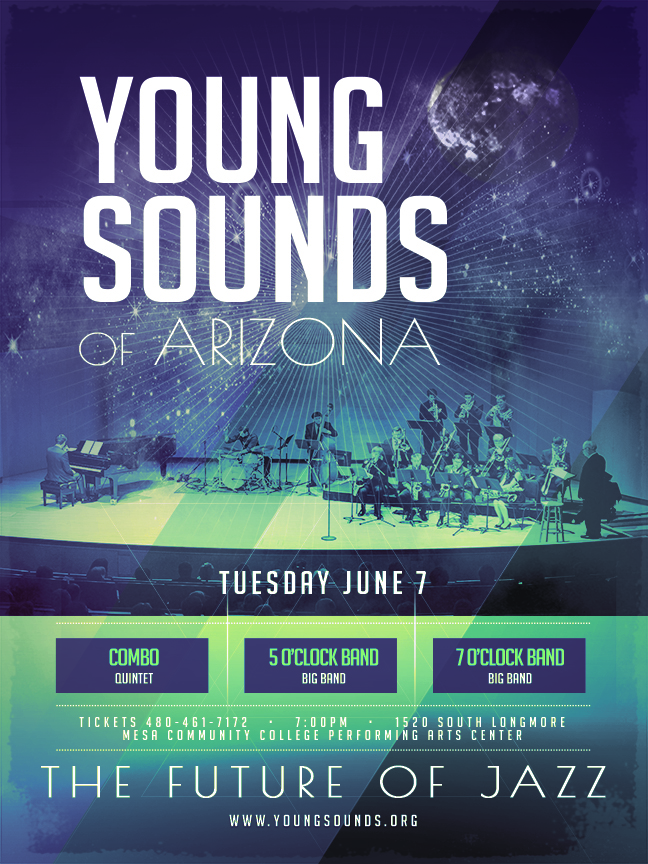 There’ll be no dearth of sizzling jazz and hot blues this month, notably starting with the 7 p.m Tuesday June 7 concert by teenage members of Young Sounds of Arizona. The ability level and cohesive sounds of these youth ensembles has thrilled and amazed audiences ever since the organization’s 1971 inception by and support of the Phoenix Musicians Union. Two student jazz big bands plus a quintet will perform this final concert of the academic year at the Mesa Community College Performing Arts Center, 1520 S. Longmore St., off Southern Avenue in Mesa, info 480-461-7172. Several of those teenagers also will guest with the Andrew Gross Quartet from 7 to 9 p.m. Thursday June 9, a free concert (donations encouraged) at the Musicians Union Hall, 1202 E. Oak St., Phoenix 85006, 602-254-8838.

Also, Mike Allen’s annual Great Western Jazz Camp will be offered daily June 13 through June 17 at the University of Arizona in Tucson featuring many jazz clinicians; full info at greatwesternjazzcamp.com

The Buzz: Among the most American of traditions are baseball and jazz, and they have come together in former Yankee center-fielder Bernie Williams. The World Series champion recently graduated from the Manhattan School of Music with a bachelor of music degree after studying jazz guitar there for four years. Williams, 47, said playing baseball and music share similarities. “There is a great correlation between the work ethic you need to have playing music and playing baseball. The more prepared you are, the better you’re going to be. If you know how to read and write music, you know how to communicate with fellow musicians anywhere in the world. It’s the universal language.” His said that his mother was a teacher for 40 years in the Puerto Rican public school system, and family rules included getting good grades before playing baseball or music. Now Williams is actively involved in lobbying for more music in schools. After graduation, he went to Washington to meet with members of Congress to help with the arts advocacy group Turnaround Arts. He also performed at the White House on May 25 for an audience that included President Obama and the First Lady.

One of America’s greatest jazz singers, Sarah Vaughan, was honored in April by the U.S. Postal Service with a Forever Stamp. The initial ceremony was held in her hometown at the Sarah Vaughan Concert Hall at Newark Symphony Hall, March 29. A special unveiling of the stamp was held in Phoenix April 12 at Patriots Park at CityScape as part of Downtown Phoenix’s month-long celebration of jazz music. The singer was still in her teens when she won an amateur contest at the famed Apollo Theater in Harlem in 1942. She soon began touring with big bands, and her subsequent solo-artist hits included “Lover Man,” “Misty,” “Tenderly” and “Whatever Lola Wants.” She died on April 3, 1990, and the stamp features an oil painting that was based on a 1955 photograph by Hugh Bell. The stamp pane, designed to resemble a vintage picture sleeve for a 45 RPM record, is is the seventh in the Postal Service’s current Music Icons series, which includes Lydia Mendoza, Ray Charles, Johnny Cash, Jimi Hendrix, Janis Joplin and Elvis Presley; a previous music series celebrated Duke Ellington, Count Basie and Charlie Parker.

Musicians’ News: Judy Conrad recently retired after being part of the teaching staff at Rosie’s House for decades. She performed as a flutist/piccoloist with the Phoenix Symphony Orchestra for 17 years. She also was former principal flutist with the Flagstaff Symphony Orchestra, and associate principal flutist for the Nouveau West Chamber Orchestra. She also performed with the Arizona Opera, Ballet Arizona orchestra, the Quintessence Woodwind Quintet and many other chamber groups. Rosie’s House opened in 1996 as a music academy for children that solicits instrument donations, as does William “Doc” Jones’ NextSchool Academy.

Former New York-based jazz guitarist Howard Alden, who has relocated to Chandler, performed the Sunday afternoon monthly jazz concert in May at the Payson Community Presbyterian Church. The peripatetic musician arrived in Rim Country after a month of gigs in England, then immediately returned there to perform “Great Guitars of Jazz” with Martin Taylor and Ulf Wakenius. Since January, Alden has toured France, Germany and Switzerland, also in the U.S. from California to New York City and Florida. In between he was part of the trio for the venerable Pita Jungle Thursday jam in Chandler, where he again will play on June 2, 9 and 30. Then he has bookings in NYC’s Birdland and Tribeca, Chicago’s Green Mill and gigs in Philadelphia and San Francisco. Our intrepid Payson reporter, Bing Brown, said that a full house of more than 100 enjoyed the jazz style of Alden plus Devon Bridgewater on violin, trumpet and flugelhorn, bassist Steve Douglas and drummer Gerry Reynolds, who organizes the concerts for the Payson Friends of Jazz. After saxophonist-flutist Tony Vacca sat in on the second set, Brown told me that one listener said, “It doesn’t get any better than this!”    Multi-talented Lynn “Wyn” Roberts performed in a USO tribute show in Philadelphia in late April, along with singer Bobby Rydell, The Tymes and The First Ladies of Rock and Soul. Roberts again delivered his spot-on impressions of Bob Hope, Jack Benny and Red Skelton (posted on YouTube). Rydell sang the songs of Frank Sinatra, Bobby Darin as well as his own big hits of the 1950s-60s including “Volare” and “Mack the Knife.” A celebration of life for longtime Arizona pianist-vocalist Ken Wain was hosted by his family and featured performances by more than 20 jazz musicians on May 26 at the Rhythm Room. Wain, 70, died May 11 after a five-decade career performing in this nation and Europe. The evening began with vocalists Margo McKeon and Laura Fial, followed by clarinetist Steve Means, saxophonist Richie Oropeza, pianists Mike Halperin and Joel Robin, as well as several guitarists. The evening closed with a vocals set that featured Delphine Cortez, Sherry Roberson, Phil Hendricks, Dennis Rowland and Francine Reed. The event’s house trio was the Gentlemen of Jazz, with leader Bob McKeon on drums, Ray Carter on bass and Santo Maglio on keyboard.

The Doris Duke Charitable Foundation announced 21 recipients of the fifth annual Doris Duke Artist Awards. Among them are eight jazz artists: Dave Douglas, Fred Hersch, Wayne Horvitz, Jason Moran, Matana Roberts, Jen Shyu, Wadada Leo Smith and Henry Threadgill. “Artists are appointed in recognition of their creative vitality and ongoing contributions to the fields of dance, jazz and theater,” according to the foundation. Each will receive $275,000 “in flexible, multi-year funding as well as financial and legal counseling, professional development activities and peer-to-peer learning opportunities provided by Creative Capital, DDCF’s primary partner in the awards.”