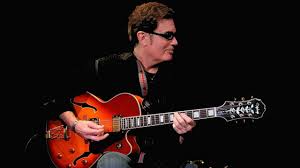 The month of April is filled with special events from the very first day to the last, kicking off with the free Chandler Jazz Festival on the first and ending with a Phoenix celebration of International Jazz Day on the 30th.

The 17th annual Chandler festival is Arizona’s largest free jazz event, created in 2000 by jazz activist Bart Salzman, and who continues to organize the annual lineup and schedule. The sounds start at 5 p.m. Friday, April 1, with an all-blues night, plus evening jazz groups at multiple downtown venues. The opening blues set will be guitarist Levi Platero’s young Native American trio from Tohajiilee in New Mexico’s Navajo Nation; next will be the Paul Cruize Blues Crew with Cruize on guitar and vocals, Royce Murray on organ and vocals, and Tim Robinson on drums; the closing featured act is the R.D. Olson Blues Band, winner of the 2014 Phoenix Blues Society Blues Challenge, and also will host 10:30 p.m. blues jam.

The next day-into-evening music menu starts at 2:30 p.m. Saturday and ends with a 10 p.m. jazz jam session hosted by the Stan Sorenson Trio. The day will feature numerous Arizona musicians, including the South Mountain Community College Latin Jazz Big Band. Among the visiting musicians will be multi-instrumentalist Gabriel Mark Hasselbach from Vancouver BC in a quintet with locals Adam Armijo-guitar, Lamar Gaines-keys, Will Gaines-bass, Buddy Banks-drums. Hasselbach, who plays trumpet, flugelhorn, C and alto flutes, valve trombone and Akai EVI wind instrument, has won several smooth-jazz awards and appeared globally. Other touring groups will be El Chicano from Los Angeles, and the Seattle-based Michael Powers Band.

There will be six stages (bring lawn chairs/blankets), the new main stage in the Downtown Library Plaza, 178 E. Commonwealth Ave., south of Chandler Boulevard and east of Arizona Avenue, plus a beer-wine garden and multiple bands performing on sidewalks and in restaurants. Parking is free in two multi-level parking garages at Boston/Buffalo Streets, east of Arizona Avenue. A full schedule is at Chandleraz.gov.

The fourth annual Phoenix International Jazz Day will feature live music from 4 to 10 p.m. Saturday, April 30, at CityScape Park, 1 E. Washington St., Phoenix, again produced by William “Doc” Jones, who attended the very first festival in New Orleans, where he was living at the time. “In 2012, Herbie Hancock and UNESCO (an adjunct of the United Nations) started the first International Jazz Day event in Louis Armstrong Park,” recalled Jones, founder and president of the NextStudent Academy of the Arts in Phoenix. “At 7 in the morning, there were more than 5,000 people in the park. After the event, I met and talked with Herbie about my jazz magazine, 504mag. He told me I had a duty, not only as a musician but as a publisher, to do my part in keeping jazz alive.”

After returning to Phoenix, Jones decided to produce Phoenix’s first International Jazz Day in 2013. “I made a call to George Benson and he agreed to be guest speaker. This year, my festival team and I are honoring a well-known and accomplished musician, Jesse McGuire, an Arizona resident who has frequently played the National Anthem on trumpet at high-level sports events and for three presidents. We also will have Dowell Davis, a first-call drummer in this town who has performed and recorded with me on every major gig and recording session during the past 12 years. And I wouldn’t think of doing jazz day without international star Carlos Rivas, my friend for over 25 years.” Other musicians will be Ioannis Goudelis-keyboards, Dan Pinson-sax, Kerry Campbell-sax, Royce Murray-organ, Chris Finet-bass, Tim Roberson-drums and Jones-keys-sax.

“We have more than six organizations partnering to promote this event. Attendance has grown from 200 in 2012 to more than 700 last year. We expect this festival to attract the largest audience to date, since this is the first year that International Jazz Day is on a weekend. We invite families and listeners of all ages to attend.” Admission is $10 advance (through April 10), $20 at the gate ($5 for children ages 2 to 10), VIP seating is $100. Advance purchase is at ticketlobster.com or call 602-268-0600. Proceeds will support the NextStudent Academy, a local 501(c)(3) organization working with local schools to make jazz education and instruments available to students from kindergarten through college. Info at www.nextstudentmusic.com or 602-524-7998.

The Buzz: A recent report on the jazz audience, distributed by the Music Business Institute, said research company Nielsen polled listeners, mostly those 25 to 48, about purchasing habits and preferences. Result: proof that jazz fans don’t just listen, but buy music. Those who prefer jazz are more likely to buy physical copies or digital downloads. Most jazz fans are male, and they travel to hear live music. They also tend to prefer high-end products, such as cars, clothes, watches, musical instruments and turntables. Jazz fans’ use of downloads or streaming leads to spending, proving they are a marketable audience for products, not a “dinosaur generation” to be ignored.

A tribute benefit for longtime Arizona musician Larry Reed at the Rhythm Room featured three hours of music on Saturday afternoon, March 26. More than a dozen musicians donated their talent to perform a mix of blues, jazz, soul and doo-wop before a responsive audience of more than 150. The event raised $1,500 for Reed’s medical treatments via donations, a raffle and silent auction. A peak musical point was Reed singing a duet of “Ev’ry Day I Have the Blues” with Dennis Rowland, the pair seated side-by-side on stage, bringing cheers and tears from the audience. Two doo-wop sets elicited cheers as performed by Rowland, Stan Devereaux, Phil Hendricks, Roscoe Taylor and Gaynel Hodge, plus Rhythm Room owner Bob Corritore on burnin’ harp. The tribute, Hodge’s idea during a month’s visit from his home in Amsterdam, featured his two renditions of “Earth Angel,” which he co-wrote and sang with The Penguins in 1954. Hans Olson opened the event, rousing the crowd with his multi-level sounds on guitar, harmonica and vocals. The day’s house-band was led by Jimmie McElroy on keyboard vocals and sax, Ray Carter on electric bass and vocals, and Bob McKeon on drums, with Elmer Green on tambourine. Other sets featured acoustic guitarist-vocalist Simon Ames, vocalist Renee Patrick (singing Reed’s longtime signature chart, “Georgia”) with pianist Charles Lewis, and a closing selection by vocalist Delphine Cortez and pianist Joel Robin, with Dan Pinson on alto sax. Donations may be sent to Larry c/o Jennifer Hamilton (his daughter-in-law), 10432 N. 47th Drive, Glendale AZ 85302.

My week-long stay in New York City last month included stops at some of the jazz venues. A top listening experience with my Manhattan-residing daughter, Suzanne McElfresh, was the weekly Monday performance of the legendary Mingus Big Band at the Jazz Standard – great charts, cohesive sections, exciting solos. I also checked out Gin Fizz in Harlem, a newer club owned by a French couple. (Oh la la, how the French love and venerate “America’s gift to the world.”) My perfect take-home souvenir was a new biography of Billie Holiday, “The Music and the Myth” by John Szwed, that clarifies previously published erroneous data. I also began reading the new Nina Simone biography, “What Happened, Miss Simone?” that was written by Alan Light, my son-in-law, as an accompaniment to the documentary of her life recently released by Netflix. Both books are luscious reading for jazz and/or blues fans.

Musicians’ News: The National Endowment for the Arts announced its 2016 National Endowment for the Arts Jazz Masters, to be honored on April 4 at an awards ceremony and celebratory concert in the John F. Kennedy Center for the Performing Arts in Washington, D.C., one of the NEA’s 50th anniversary events. The honorees are vibraphonist Gary Burton, saxophonist Pharoah Sanders and saxophonist Archie Shepp, also jazz advocate Wendy Oxenhorn, the executive director and vice chairman of the Jazz Foundation of America. The Jazz Masters award is the highest honor that the U.S bestows on jazz musicians, and each will receive a cash award of $25,000

Young Arizona vocalist-on-the-ascent Ira Hill returned from an Oregon performance with this report: “Honored to have won the collegiate vocal category of the PDX Jazz Forward Competition in Portland. Got to perform an opening set for Marquis Hill last night at the Portland Jazz Festival, and met some incredible musicians and singers.”

Swedish-born vocalist Vismaya (Ingrid Hagelberg) is touring with her “Red Suitcase” show that features jazz and other songs honed during her life in Europe. She’ll be in Boca Raton, Florida soon, but first will perform in Sedona on April 1 and at Sacred Grounds on April 14.

The man known as “Doc” who books the Opa Life Greek Café, has announced a total of 19 live-music events in April at the Tempe venue. What began as two nights a week in December 2014 has expanded both its schedule and musicians’ base to provide a wide variety of sounds, from straight-ahead jazz to blues and Latin, plus weekly jam sessions.

Quotable: “If you have to ask, you’ll never know.” Miles Davis’ answer to the question “What is jazz?”