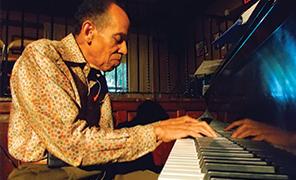 Pianist Charles Lewis, among the musicians who regularly performed at the legendary Century Sky Room jazz-blues club of 1960s Phoenix, will play for the club’s reunion on Sunday, Dec. 6, 2015. The free public event starts at 4 p.m. and will feature others who entertained there, including vocalist-bassist Michael Reed. The event will be at the William H. Patterson Elks Lodge #477, 1007 S. Seventh Ave. (north of Buckeye, lot parking at the lodge and across Seventh), Phoenix 85007, 602-254-1772.

The reunion was organized to rekindle the spirit and memories of the oldest continuous jazz and blues club that was open from 1961 until it was razed in 1982. The reunion event will include free food and live music. Donations will be accepted for the lodge’s building fund.

The reunion was the idea of George “Sweet Erv” Campbell Jr. of the George Campbell Sr. family that operated the venue. It was on the second story of a wood-frame building at 1140 E. Washington St., where the rest rooms were outside and down a long corridor. Robert “Bobby” Clayton, who operated Bobby C’s in a red brick building on that same property from 2003 to 2013, said luminaries such as guitarist George Benson and organist Jimmy Smith often sat in at his club’s Sunday jam sessions, replicating the Sky Room’s venerable history.

Local musicians built the early reputation of the club, and it was where Margo, Francine and Michael Reed launched their individual Arizona careers, as did internationally acclaimed Phoenix-born drummer Lewis Nash.

Frequently, members of the touring Duke Ellington, Count Basie and other big bands would stop by and sometimes sit in with locals, after performing concerts at the Phoenix Playboy Club or Symphony Hall. Traveling bands heard about the Sky Room from colleagues or audience members. Other touring notables who visited the club were bandleader-vocalist Louis Jordan, vibraphonist Milt Jackson, organists Jimmy McGriff and Wendell Byrd, drummer Charlie Perslip, vocalists Billy Eckstine and Ike Cole; and saxophonists Paul Gonzalves, Hank Crawford and Stanley Turrentine.

The Sky Room was the first location for the “Roots of Jazz” series produced by then-manager, Mary Bishop, who later produced it in another legendary jazz venue, The Boojum Tree Lounge of the Phoenix Doubletree Inn, that regularly also booked stars such as trumpeter Dizzy Gillespie, saxophonist Stan Getz, Super Sax, pianists Ahmad Jamal and Monty Alexander, as well as pianists-vocalists Mose Allison and Judy Roberts.

The Buzz: As the holiday “feast-ival” weeks approach, here’s a hot tip that relates a satisfying gastronomic link to jazz music. Warning: Jazz fans watching holiday calories may want to skip listening to their favorite music while dining because a new diet study shows that genre music can make foods taste better.

The Daily Mail, a British newspaper, reported on a study that showed that listening to jazz can make food taste better. The genre of background music can affect how satisfying something tastes and so may impact on how much is eaten, research reveals. Researchers from the University of Arkansas played four types of music — classical, jazz, hip hop and rock — while people ate. Participants found the food more satisfying when jazz was played, and less so when hip hop was in the background. There was no effect for rock or classical music.

The researchers stated, “People often consume food and beverages in the presence of background music. Nevertheless, little attention has been paid to the influence of sound on sensory perception and acceptance of foods.” The reasons why jazz and hip hop had such an effect were unclear.

Musicians’ News: Saxophonist Sonny Rollins received a Lifetime Achievement Award from the Jazz Foundation of America at the organization’s 14th annual “A Great Night in Harlem” event in October at the legendary Apollo Theater in Harlem.

Vocalist Dennis Rowland had a guest-artist residency with the Northern Arizona University big band directed by Chris Finet. Reports came that Dennis did excellent job, and that the students loved him. Inside info: One of the college band members was pianist Garrison Goodwin, who is the son of the eponymous leader of Gordon Goodwin’s Big Phat Band of Los Angeles.

When Wynton Marsalis and the Jazz at Lincoln Center Orchestra performed a tribute to Thelonious Monk at New York City’s Town Hall, a featured guest artist was 12-year-old jazz-piano prodigy Joey Alexander. The Indonesian youth, who thrilled the audience at the Musical Instrument Museum in October, was 6 when he played by ear Monk’s “Well, You Needn’t.” This year, Alexander released his debut album on Motema Records, “My Favorite Things,” the nine tracks including “Lush Life,” “Round Midnight,” “Over the Rainbow” and “Giant Steps.” The autographed CD was added to my shelf of favorite recordings.

There’s good news from Sirius XM satellite radio. It can continue broadcasting “oldies music” until Dec. 31, 2017, by paying $210 million to keep playing deceased artists such as Benny Goodman, Louis Armstrong Wilson Pickett (“Mustang Sally”) and Otis Redding (“Sittin’ on the Dock of the Bay,” as well as The Beatles. . Sirius agreed to pay Capitol Records, Sony Music Entertainment, UMBG Records, Warner Music Group and ABKO Music, which challenged Sirius’ free use of sound recordings issued prior to Feb 15, 1972. A 2013 court case in Los Angeles based its ruling on a 36-page listing of recordings allegedly infringed on by Sirius. The court

ruled that Sirius failed to obtain licenses and pay for use of the plaintiffs’ pre 1972 recordings to paying subscribers. The settlement terms allow Sirius to broadcast the “oldies” through Dec. 321, 2017.