Review: Young Sounds of Arizona at the Musical Instrument Museum 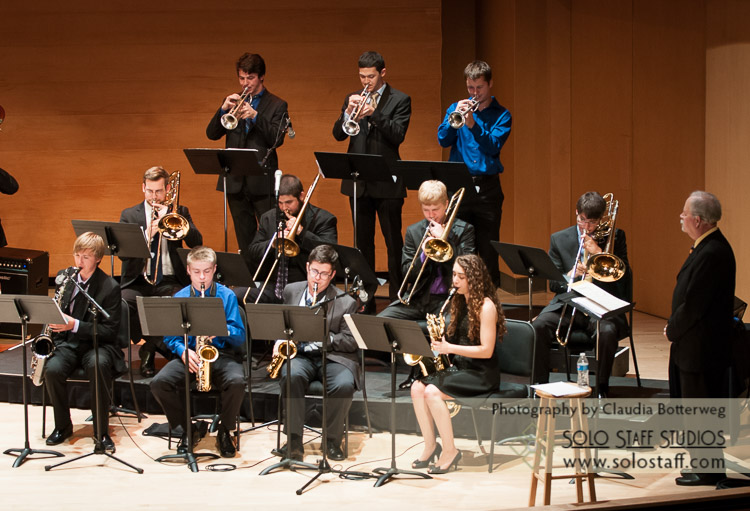 The spring concert by The Young Sounds of Arizona’s two bands and a combo was performed for a near-capacity audience on June 1st at the Musical Instrument Museum in north Phoenix.

A 1940s Gil Evans arrangement of “The Maids of Cadiz,” familiar from being on his first album with Miles Davis, “Miles Ahead,” is a chart written in 1874 by Leo Delibes for voice and piano. This performance featured trumpeter Alex Price and the sax section again.

A Sammy Nestico original, “It’s Oh So Nice,” was a showcase for energized sounds from the trombone section, enriched by three returning alumni. A minimalist-but-still-swinging Basie piano solo by Franklin was engaging, bassist Eric Nakamoto solidly underlined the swing mode, with drummer Lee Hauser handling drum fills. Throughout, the band’s command of dynamics was far beyond usual student levels.

The closing chart of the set was Fred Sturm’s “Ascending” that opened quietly and shifted into a Latin feel with a trio of harmonizing trumpets. Price later switched to flugelhorn to showcase his full and fluid style.

The 5 O’Clock Band, also directed by Wedge, delivered a mix of styles, ranging from Neal Hefti’s infectious Basie hit “Splanky” to “Prairie Dance” from the Maria Schneider book, a lustrous composition that featured alto saxophonist Clint Ottmar. The fast swing tempo of “Squares Be Gone” featured two solo segments by pianist Christopher Reyes, and the set’s closing selection was an R&B hit in the 1960s for Booker T. and the M.G.’s, “Green Onions,” and the band delivered that catchy funk feel.

a trombone-baritone duet by Wiliford and Sokolov, and Price muting his trumpet in segments.

FootNote: Young Sounds of Arizona was created in 1971 by the Phoenix Musicians Union, Local 586 AFM, which has continuously sponsored the youth bands. The union also presents local musicians in free concerts on the first Tuesday of each month, open to the public in the comfortably cozy Musicians Hall, 1202 E. Oak St., Phoenix 85006, info 602-254-8868.