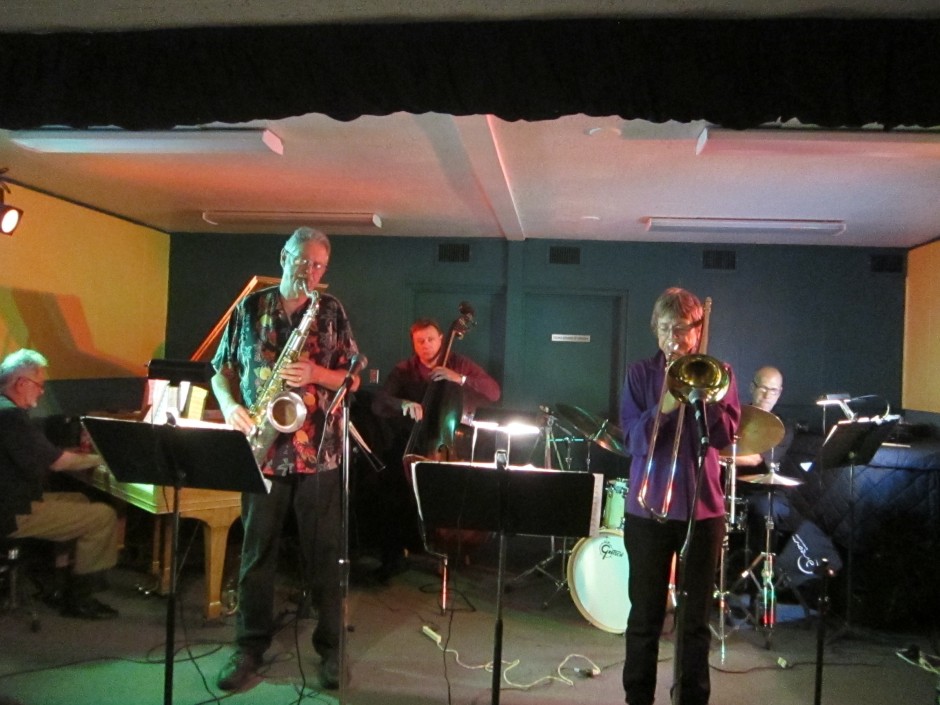 The Sunday afternoon program opened with the jazz standard “I Should Care,” Small launching the melody line and Chrislieb playing mostly in the lower register of his horn. The quintet then roared into the ear-challenging “Bop Suey” with its dozen-plus bebop-chart references skillfully executed by the two horns, Boatman adding more of his always-clever quotes.

Small next played late trombonist Frank Rosolino’s “Blue Daniel” with exceptional tone and form. Then the ensemble worked over “We’ll Be Together Again,” played first in a slow ballad mode, then sparked by a tenor-driven second chorus that segued into a stunning Christlieb soliloquy. An adept exploration of Clifford Brown’s “Daoud” closed the first set, Tomlinson inventively varied in his fours segment.

Benny Golson’s infectious “Killer Joe” was the post-intermission opener for all to dig in and swing. Christlieb then chose Dizzy Gillespie’s “Woody ‘n’ You,” the 1940s homage to bandleader Woody Herman, following that with a samba treatment of trumpeter Lee Morgan’s “Ceora” that was enlivened by Radavich’s resonant liquidity. Hank Mobley’s hip “This I Dig of You” was the concert’s closing chart, Boatman applying minor harmonies to propel the dual horns action..

When the program moved into seasonal favorites, some in the audience set their toes a- tapping to the 1950s rockabilly sound of “Jingle Bell Rock.” That winter hit was popularized by performers ranging from Brenda Lee to Bill Haley and the Comets, to Alvin and the Chipmunks to, more recently, George Strait and Blake Shelton-Miranda Lambert; a half-century later, many radio stations still play one of the versions during the season.

No traditional holiday program would be complete without “Rudolph the Red-Nosed Reindeer” from 1939 and the World War II-era “I’ll Be Home For Christmas,” also the beautiful ballad,“The Christmas Song” and, of course, “Jingle Bells” (that sound emulated via cymbals from the drum kit). The finale was a richly evocative rendition of “Silent Night.” Then Robinson and the trombones added a dash of humorous wit with the “That’s All Folks” closing theme from the Loony Tunes cartoon series, leaving listeners smiling for the road-trip home.

FootNote: The two concerts were presented by the Phoenix Musicians Union Local 586 AFM and Young Sounds of Arizona. The next monthly first-Tuesday performance will be at 7:30 p.m. Tuesday, Jan. 6, featuring jazz-blues organist Peter Zale. All concerts are free and open to the public in the hall, 1202 E. Oak St., Phoenix 85006, 602-254-8838, www.promusicaz.org