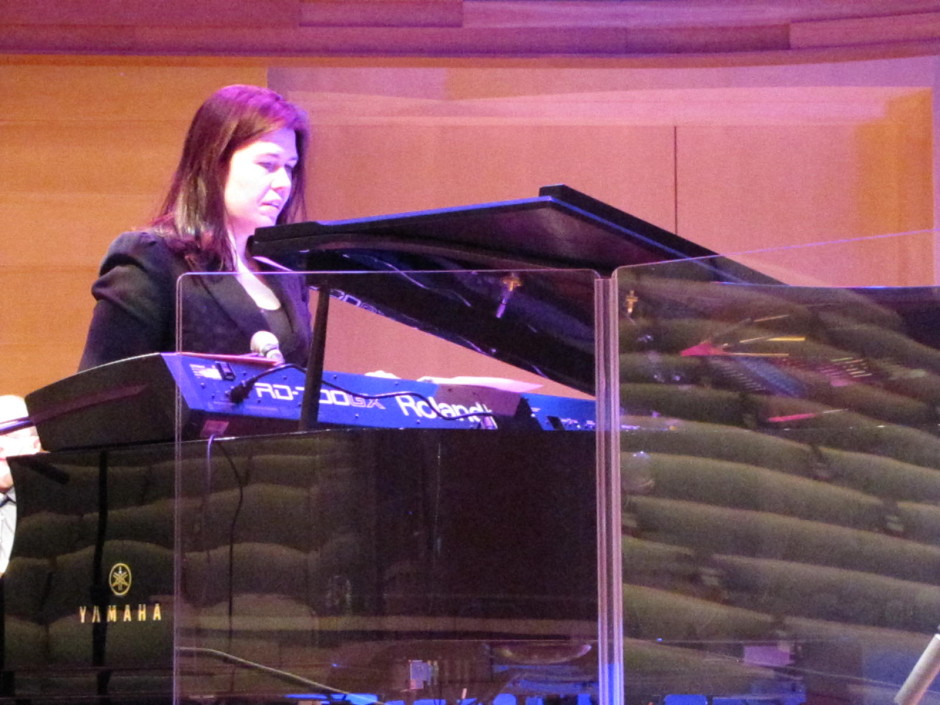 By Patricia Myers:
The astounding ingenuity and amazing repertoire of pianist Nicole Pesce dazzled yet another audience at the Musical Instrument Museum in Phoenix when she performed on Nov. 16, 2014 in solo, duo and quartet settings as part of the museum’s “I Am AZ Music” series.

Phoenix-born Pesce has been performing professionally for nearly 30 years, since the age of seven after classical training by her father, Nicholas Pesce Jr. She soon supplemented that repertoire with jazz, blues, country, Latin, pop and Broadway show-tunes, quickly learning 100 songs. At 10, she had memorized 500 tunes and won the Discovery National Television Competition. She began composing at the age of 11 and has 300 compositions in her repertoire. At 14, she appeared on the Jerry Lewis MDA Telethon and did an extensive U.S. tour with Lewis. She performed for a year in Las Vegas before returning to Phoenix for ongoing hotel, resort and club work, including a seven-year booking at My Florist Restaurant that earned her a cult following.

Pesce played three keyboards this night, a Yamaha disclavier with a small electric keyboard atop it, plus a full-size synthesizer behind her bench. The concert was live-streamed by Yamaha in support of its disclavier, an acoustic piano with electronic sensors for recording and solenoids for playback.

Performing solo during the first quarter-hour, the ever-smiling pianist infused witty swing and stride styles into the perennial jazz chart, “I Got Rhythm.” She then delivered a clever version of Cole Porter’s “Night and Day” by weaving in a series of familiar classical licks. Next she played in boogie-woogie mode with agile right-hand excursions on Meade Lux Lewis’ “Honky Tonk Train Blues.”

The groove deepened when the format expanded to a jazz quartet with Phoenix-based tenor saxophonist Jerry Donato, electric bassist Bob Lashier and drummer Dom Moio. Hoagy Carmichael’s lovely “One Morning in May” brought lyrical balladeer warmth from Donato, as did “The Intimacy of the Blues” by Duke Ellington.

The first set closed with a fan favorite, “Dizzy Fingers,” played with precision at super-speed. Before leaving the stage for intermission, Pesce invited audience members to text song titles to her cell-phone, announcing the number, promising she would perform those in the second half. When she returned, she announced that she had received 56 texted titles and proceeded to create a medley of excerpts form “Nola,” “Great Balls of Fire,” “Oye Como Va,” “The Girl from Ipenema,” “My Cherie Amour,” Leonard Cohen’s “Hallelujah,” “At Last” and “Rhapsody in Blue.” Whew!

But Pesce wasn’t done; she then asked for more titles to be called out, performing a second ear-boggling medley that included “Begin the Beguine,” “Stardust,” “Maple Leaf Rag,” “I’ll Remember April,” “Phantom of the Opera,” “The Way We Were,” “Flight of the Bumblebee” and “Flat Foot Floogie.” Amid the virtuosity of her ability, one could sense her pure joy in playing piano.

A duet with tenor saxophonist Donato, whose elegant sensuality on “The Nearness of You” was complemented by rhapsodic piano stylings for the perfect pairing. Pesce’s jazz chops proved just as solid as she traded fours and twos with Lashier on his fretless bass during “If I Were a Bell,” and then with drummer Moio on the calypso rhythms of “St. Thomas.” Pesce continually shifted fluently among musical genres, while exuding the friendly charm and a sense of humor that has created her formidable following, the 300 seats sold out two weeks before the concert date.

Pesce performs Saturday evenings at the Ritz Carlton Hotel in Phoenix with her colleague of the past 15 years, vocalist Jeffrey Hattrick, who sang the Lady Gaga hit “Edge of Glory” before a quartet treatment of “Smile,” followed by an encore of a Pesce original to close the concert.