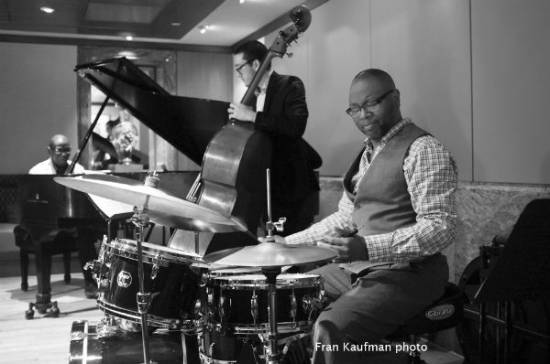 The Nash-Greene musical relationship dates back to the late 1990s in the Lewis Nash Ensemble, with Greene on saxophone, Steve Nelson on vibraphone, David Finck on bass and Steve Kroon on percussion. The group had a two-year stint in the Jazz at Lincoln Center Program that included performances in the New York public school system.

Greene’s album combines jazz with spirituals, contemporary Christian music and ballads, plus three original songs. The music was premiered in December at the Jazz Standard in New York City and also in Danbury, CT

For the album’s release, Greene said, “Music has a unique way of communicating and healing. I’m so thankful that music is my profession, that I am able to write and arrange to create settings that convey the emotions I experience, not the least of which is the pain that my family and I have endured at a time when words fail.”

Greene added, “In the days after my daughter was killed, playing and writing music wasn’t even a thought. I was very much in shock, grieving deeply and trying to just function coherently. Family and friends surrounded us and held us up, and we received 10,000 communications from people around the world – emails, texts, Facebook messages, voice calls, letters. The community of musicians was front and center for that support. When I called, they responded, ‘Whatever you need, just say the word, and I’ll be there.’ ”

In late January 2013, Greene returned to his former regimen of practice and composing. Soon after, Norman Chesky, co-owner of Chesky Records and HDtracks, contacted the musician with an offer to donate the production of any recording, and to give him complete ownership. Greene decided to weave lyrics and singers into the music for the first time on one of his recordings. He said, “Ana loved to sing and listen to singers, and had a wonderful singing voice,” Greene said. “So an album dedicated to her memory needed to have singers and songs that were important to her, and to me and my family.

“Many people have asked what they can do to help, and this is my answer: Let’s remember what happened at Sandy Hook. We can each hold up our end of the bargain, which is to somehow learn to love ourselves, and then see past ourselves and love our neighbor. That’s pretty simple, but if we all did it, I think our existence would be different.”

Beautiful Life opens with a recording of Ana singing the traditional “Saludos” (“Greetings”) at a Christmas celebration (parranda) with the family of her mother Nelba Márquez-Greene in Puerto Rico, recorded a year before her death, with her father playing in the background. The next chart is Greene and Metheny performing “Come Thou Almighty King,” followed by a family recording of Ana singing that hymn to her brother Isaiah’s piano accompaniment.

“Last Summer” is a quartet track that relates to the photograph of Greene’s children that appears on the album cover, showing them from behind with their arms around each other’s shoulders. It was taken in Winnipeg, Canada, where Greene taught at the University of Manitoba from 2009-2012.

The next selection features the voice of Javier Colon, Greene’s former classmate at Hartt School of Music, who won the 2011 edition of NBC’s “The Voice,” delivering Greene’s lyric for “When I Come Home” accompanied by the quartet and string ensemble.

Greene, 39, originally recorded “Ana’s Way” instrumentally as “Ana Grace” on the 2009 recording Mission Statement. Elling’s interpretation is backed by Greene and Rosnes, plus the Linden Christian School Early Years Choir of classmates of Ana and Isaiah in Winnipeg.

Pianist Kenny Barron joined Greene for renditions of two Broadway-show songs, “Where Is Love?” from “Oliver” and “Maybe” from “Annie,” with Greene playing soprano saxophone. Greene said, “My daughter loved ‘Annie,’ and would sing ‘Maybe’ a cappella with great pitch and rhythm in the back of the car when we were driving around.”

Greene also included “Where Is Love” in honor of Jackie McLean, his musical mentor who played that melody for a 15-year-old Greene during their first meeting at Hartford’s Artists Collective. Other album tracks include “Prayer” that is Greene’s arrangement of the text of the “Lord’s Prayer,” with Chestnut accompanying Greene’s tenor sax, also contralto Latanya Farrell (also from Hartt), whose voice appealed to Ana as a toddler, her father said. Ana also was a fan of Anika Noni Rose (a high school classmate of Greene’s in Bloomfield, CT), after hearing her perform “Little Voices” in the role of Princess Tiana in the animated film “The Princess and the Frog,” backed by the Linden Children’s Choir.

“I wanted the music to reflect the way that Ana lived,” Greene said.

A portion of the proceeds from CD sales will be donated to two charities in honor of Ana. One is the Ana Grace Project of Klingberg Family Centers, designated by Greene’s wife, Nelba, a marriage and family therapist, to promote love, community and connection for every child and family through partnerships with schools, mental health providers, community organizations and faith leaders. The other is the Artists Collective, where families in the Greater Hartford area have access to training in the arts