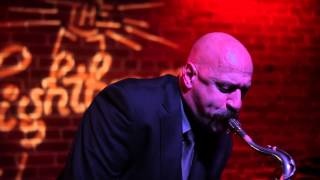 Once again, tenor saxophonist John Tendy brought his energy and style to the stage of the Musicians Hall in Phoenix, performing May 16 with Phoenix pianist Armand Boatman and acoustic bassist Jack Radavich, plus Los Angeles drummer Dick Weller.

The repertoire was audience-friendly, from “Work Song” and “Sweet Georgia Brown” to “Tea for Two” and “Under Paris Skies.” The quartet’s synergy was exhilarating and full of energy, whether performing a samba or a be-bop classic.

“Sweet Georgia Brown” was counted off at near Uzi-speed, Boatman’s fleet fingers and agile invention injecting quotes from “Flight of the Bumblebee,” “Nola” and “Honeysuckle Rose.” Listeners smiled at hearing the golden oldie, “September in the Rain,” and seemed to be spellbound by the exquisitely slow ballad rendition of the usually bouncy “Tea for Two.” The torrid tempo of “Nagasaki” was a roaring pleasure, contrasted with the intimate fervor of “Body and Soul,” Tendy offering a soliloquy of 32nd notes to end the chart.

A quartet of such veteran jazz musicians creates instant synergy, the most indelible characteristic of jazz, even though they don’t perform together regularly. Another exceptional element comes via each musician’s rich repertoire, most evident in their clever injections of phrases from other songs, i.e. “jazz quotes.” Boatman is the widely acclaimed resident-genius of same and, teamed with Tendy and Radavich, his clever excerpts triggered chuckles and grins among other musicians and uber-cognizant jazz fans in attendance.

Among those was Weller’s first drum teacher, Don Bothwell, retired professor of percussion at Mesa Community College. Weller, who grew up in Arizona, also was an early-years member of Young Sounds of Arizona, the statewide high-school-age honor jazz band. Its bands and combos will perform at 7:30 p.m. Monday, June 1, in the Musical Instrument Museum concert hall; info at youngsounds.org or themim.com.

Tendy and Weller previously performed with the Phoenix duo at the hall on Sunday, November 24th, 2013. The free concert was one in a continuing series at the cozy and comfortable hall of the Phoenix Federation of Musicians, Local 586 AFM.