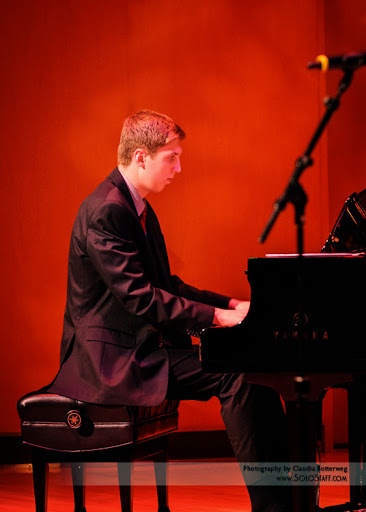 Listening to recorded jazz is an important element of learning to play better, says Jacob Franklin, 17, pianist for the 7:00 Band of Young Sounds of Arizona. “I studied classical music starting when I was 7, and my grandfather had a jazz record collection that I listened to with him. In Young Sounds, Mr. Wedge (director Vince Wedge) is avid for us to listen to jazz, and has his collection available to us. He advocates ‘Listen every chance you get.’ Jazz is a lot of fun for me, getting to know lots of kids and getting together to play jazz with them.”

Jacob’s grandmother told him that when he was 4, he often would sit at the piano “and bang on it, but she couldn’t stand it, and would tell me to go out and play. Five minutes later I was back, so she started to teach me. When I was 7 and started private classical lessons, I enjoyed practicing. Playing piano sounded cool and it developed into a passion for me.”

When Jacob was in junior high school, a jazz band came to play. “I thought that sounded like a lot of fun,” he said. He soon joined the jazz band at Red Mountain High School in Mesa, where he is a senior. Then, during his freshman year, Jacob broke a finger on his left hand. “I had to focus on block chords for six months, not the melodic parts. The director (Wedge) told me to learn thirds and sevenths, and then I started figuring out chords.” Every member of Young Sounds has to audition for a place. “We do it in front of a video camera. We had to be able to play scales and ‘Just Squeeze Me’ and then we had to open The Real Book at any page and sight-read the chart.”
Jacob is in his fourth year as a member of Young Sounds, having played the first three years in the 5:00 Band. “The third year, Mike Shellans was hired and gave lessons after the band practice. That really helped me with soloing, a whole other aspect of playing jazz.”

While a sophomore in high school, Jacob also enrolled part-time at Scottsdale Community College. His first-semester classes were jazz combo and improvisation focuses with bassist John Sims, and then bassist Will Goble. Jacob also was listening to more recordings.

“I listened to a lot of Bill Evans, a definite influence on the way I play. Then Will (Goble) suggested I listen to Wynton Kelly and a wider range of pianists, more of the 1950s era, where the heart of jazz was. Then when I heard others like Dave Brubeck. I thought that was interesting. In my sophomore and junior years, I was trying to find my way. My style is definitely influenced by transcribing a lot of Bill Evans. He’s first and foremost, and also Wynton Kelly. They were my first two big guys, but I’m still trying to find the entirety of my playing.”

Jacob was selected in 2013 for the all-state jazz band, and has won two Young Sounds of Arizona scholarships. “With the first one, I bought a portable keyboard to take to gigs. The second one, in my junior year, was the Armand Boatman Scholarship that I used for private lessons and taking classes at Scottsdale Community College.” He has played paid gigs at the Phoenix Art Museum (for the Hollywood costume exhibition), Neiman Marcus department store and for a wedding, working with musicians from his school and Young Sounds.

Although Jacob said he wants jazz piano to be part of his future, he plans to major in broadcast journalism in college with the goal of becoming a sports analyst.

FootNote: Young Sounds of Arizona was created in 1971 by the Phoenix Musicians Union, Local 586 AFM, which has continuously sponsored the youth bands. The union also presents local musicians in free concerts on the first Tuesday of each month, open to the public in the comfortably cozy Musicians Hall, 1202 E. Oak St., Phoenix 85006, info 602-254-8838.