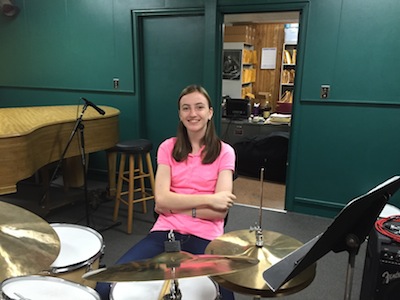 Dawson Weiss entered the world of jazz music via a close family tie: her grandfather Alan Whyte, who was a big-band pianist in the 1940s. Her love of playing drums started at the age of 12, and she also plays acoustic guitar and electric bass.

Dawson, 16, is the drummer for Young Sounds of Arizona’s 5 O’Clock Big Band, one of three ensembles that will perform at 7 p.m. Tuesday June 7 in the Mesa Community College Performing Arts Center, 1520 S. Longmore (off Southern), Mesa 85202, 480-461-7172 for admission and more information. The other bands will be the 7 O’Clock Big Band and the Young Sounds combo, led by Young Sounds director Vince Wedge and assistant director Andrew Gross.

Dawson’s most recent performance was in a Young Sounds concert in May at the Phoenix Federation of Musicians, which has sponsored and financially supported the metro-Phoenix area high-school youth jazz bands since its inception in 1971.

Sitting at the drum kit, Dawson showed style and assurance, her graceful moves deliberate and controlled with no extraneous motions. A high school junior who is home-schooled, she attended a summer jazz camp at Mesa Community College on the recommendation of her private music instructor, Josh Gottry.

“Before the camp, I could play rock and swing. I knew what a swing beat was, but that was the extent of my jazz knowledge. I was introduced to an entirely different musical language in a new genre called jazz, and that playing drums is not just banging away, that drums have emotion, they’re not just background. I met Dom Moio through that camp, and he was so encouraging. He taught me so much in such a short time, and I began to really embrace jazz.

“I find myself drawn to the freedom and creativity of jazz that’s such a contrast with the world we live in,” she said. “The great Buddy Rich is my favorite drummer, and I love listening to John Coltrane and Cannonball Adderley, how they play jazz, how they throw in the licks.”

Dawson started listening to jazz on KJZZ radio and “I immersed myself in listening to different artists.” She also was playing in a daytime combo at Chandler-Gilbert Community College, where she began pulling CDs from the music department library. “It had hundreds of CDs that had been donated, and Young Sounds has its own library. And my worship pastor is a jazz fan,” she added.

Six months after the camp, Dawson said “I was looking for opportunities to play jazz and really challenge myself as a drummer. I knew of the history of Young Sounds, and I respect their mission and tradition. I am honored to be a part of it, surrounded by strong student musicians who love jazz and want to honor the music, and be the best musicians they can be. That is inspiring, and it pushes me to excel yet more.”

Asked about her favorite musicians to listen to, she replied, “My favorite jazz musician is my grandfather, Alan Whyte. He played piano for many years with the Gentlemen of Jazz in Edmonton, Alberta, Canada. He began playing piano in big bands in the ’40s, and now I appreciate his music so much more. The variety within the world of jazz is incredible, and I appreciate and am challenged by the diversity.

“Lately, I have become more partial to the blues. Miles Davis’s ‘Kind of Blue’ album is a favorite of mine. I like its fullness, and the nice punch of the bass. It’s a groove to relax to. I just sit and listen, and it calms me, it puts me in thoughtful mood that you don’t get in bebop or swing.”

She also like Latin jazz, “artists like Poncho Sanchez. I love how it sounds, a different way of playing trumpet, and so many different kinds of percussion instruments, like banging on a tin can or shaking a bottle of sand. The rhythm is so unique — you don’t know what you’re going to get — it’s a completely unique sound.”

Dawson plans to attend Arizona State University to pursue a degree in Emergency Management and Homeland Security. But, she added, “I will continue to study and improve my jazz percussion skills as part of the local jazz community.

“Young Sounds has given me an opportunity for artistic growth that I would not have had otherwise. It has been a demanding and rewarding experience. There’s so much value in being mentored by professional musicians and educators who challenge and support us every week. And I love being part of the jazz legacy in Arizona that is Young Sounds.”

Her band and the other two ensembles are rehearsing new material for the June 7 concert. Her favorite chart? “It’s a really cool 5/4 shuffle, but I don’t know the title because we just started playing it. I like it because I don’t get to play a lot of 5/4. I like a challenge, and it’s a new twist. I hope we get to play it for the concert.”

** FootNotes: Auditions for Young Sounds are scheduled 5-9 pm Mon. May 16 and 23; 10 am to 2 pm Sat. June 4 and 11; info http://youngsounds.org/content/auditions   Young Sounds of Arizona was created in 1971 by the Phoenix musicians union, and remains the ﬁrst and oldest program of its kind in the nation. Young Sounds is comprised of students between the ages of 13 and 18, from schools throughout the metro-Phoenix area.  All members are selected by audition and are considered to be the best young talent in the Valley. Young Sounds is a non-proﬁt 501(c)(3) organization, governed by a volunteer board of directors and supported by Professional Musicians of Arizona, Local 586 AFM.  Performances and direct expenses for the organization as well as annual college and jazz camp scholarship program are paid for by the Young Sounds organization.  In addition to these programs, Young Sounds sponsors a variety of clinics by noted performers and educators. The union also presents local musicians in free concerts from 7 to 9 p.m. on the first Tuesday of each month, open to the public in the comfortably inviting and musically decorated Kottner Hall. All donations go to The Young Sounds of Arizona. The hall is at 1202 E. Oak St., Phoenix 85006, 602-254-8838.