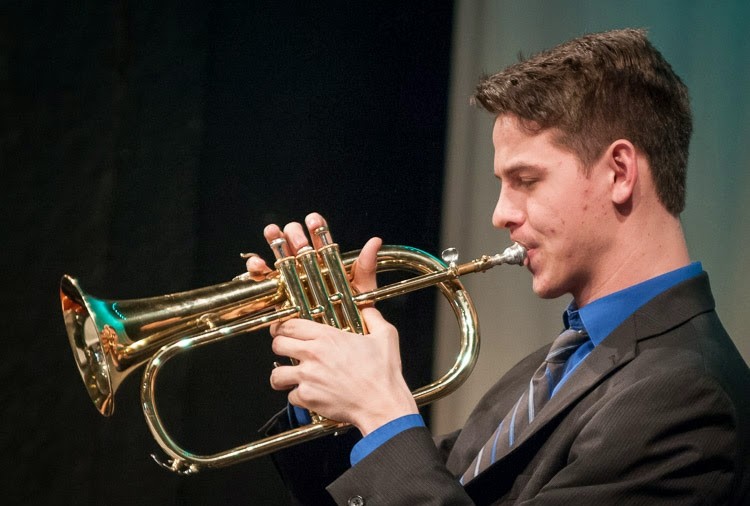 Trumpeter Alex Price started classical music lessons in the second grade. He loved playing piano and clarinet in school bands, and switched to trumpet in the seventh grade.

But he was thinking about quitting music when a teacher put him in a school jazz group. “That was a really new experience, more fun and creative, really cool with a sense of camaraderie,” said Alex, 17.

“Jazz band wasn’t as rigid as classical music where you stop every five measures and play one section over and over and over,” he said. “And my jazz band got to travel around; we performed at a Midwest clinic and the Reno Jazz Festival.”

In his freshman year at Hamilton High School in Chandler, Price was encouraged by another student who was in Young Sounds of Arizona to audition for the bands and, in August 2011, he qualified for the 7:00 Band.

“The first year was pretty nerve-wracking. The music was hard and all the players were really good. I started feeling comfortable after a couple of rehearsals, but I was a freshman and surrounded by ’big fishes.’ But it was fun, and playing with high-level players thrust me to a higher level.”

In his sophomore year, Alex said he was feeling more comfortable, confident that he had stepped up his playing, and was among the returning members of Young Sounds. He had been soloing for two years when he played his first improvised solo. “Soloing was different than anything I had done before, more complicated. You had to think about the different chords, but playing a long flugelhorn solo felt unique and special.”

For Alex, the Young Sounds attitude about playing jazz is a bonding activity. “If you enjoy music, join Young Sounds – they’re all great kids, and some kids have to drive two hours to rehearsals. You’re part of a group of people who think like you do about music. I look forward to going to rehearsals and I enjoy playing. It’s a great program to be in, with people who love music.

“I love playing jazz at school and we have a lot of fun – we start jamming when the director goes out of the room. But Young Sounds is at a different level.”

Thinking back to his first experience playing non-classical music, Alex said, “At first I was scared like most of the kids, but it was so fun having a creative outlet, feeling the groove, and I loved to improvise.”

Alex said he was interested in music at an early age because his parents played both classical and the jazz recordings of Miles Davis and John Coltrane. “So I grew up hearing and having an appreciation for jazz. I’m happy that my parents had varied musical taste and played jazz for me, or I wouldn’t have known about it.

“You have to listen to music to play it, especially jazz. It’s important to find your style. My trumpet teacher told me that you accumulate these sounds to create your own. In eighth grade, I heard a Maynard Ferguson CD, a totally different experience, exciting. At the perfect stage in my life, I was so awestruck at what he was doing with the trumpet, the high notes that have been described like ‘the tea is starting to boil.’

“When I heard Chris Botti and Miles, I didn’t know a trumpet could sound like that. It’s a sound every trumpeter strives for – round, high and very open.”

Alex is a senior who also has been playing in the Mesa and Scottsdale community college bands, “wherever I can perform.” He intends to enroll in the Arizona State University School of Music to major in trumpet and jazz studies. He’s also interested in English and writing, and law and journalism. He says, “I love to play the trumpet, and I’ll never stop playing it.”

Auditions are being scheduled now for students ages 14 to 19 in middle-school and high school. Any instrument can audition at Professional Musicians of Arizona, AFM Local 586, 1202 E. Oak St., Phoenix 85006, from 10 a.m. to 2 p.m. Saturday, June 6, and from 6 pm to 9 pm Monday, June 8. If there are questions, email youngsoundsofarizona@gmail.com, or call the Musicians Hall, 602-254-8838. Audition details are available at the Young Sounds website, http://youngsounds.org/content/auditions

The Young Sounds of Arizona was founded in 1971, and remains the first and oldest continuous program of its kind in the nation. It is a 501(c)(3) non-profit organization, sponsored since its inception by the Professional Musicians of Arizona, AFM Local 586. For more information, go to youngsounds.org or Facebook.com/youngsoundsofarizona or MusicSceneAZ.com, or call 602-235-2309.