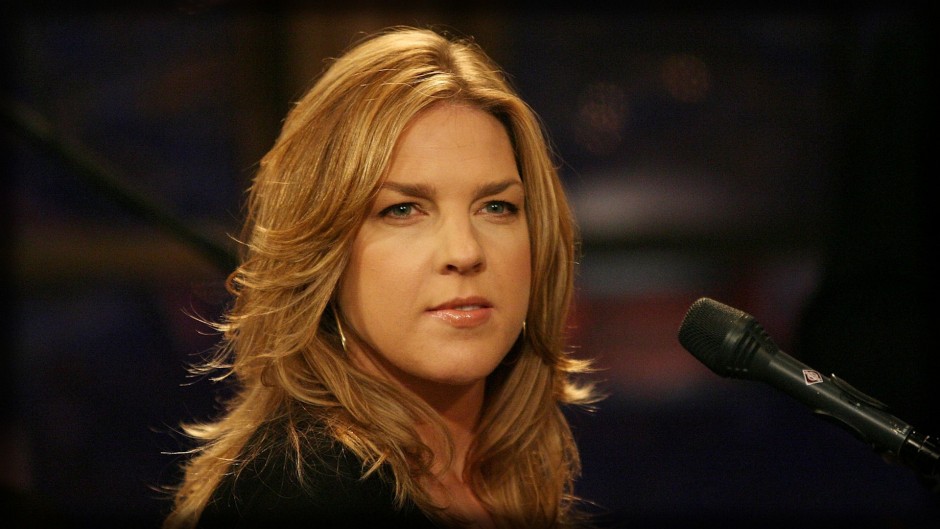 Diana Krall Sextet
Mesa Arts Center
Mesa, Arizona
April 8, 2014Diana Krall applied her sultry voice and dynamic piano style to a captivating if surprising concert that combined jazz with tender childhood memories, silent-film clips and Seinfeld-style mischievous humor. In a stage setting that resembled an old-time theater, Krall mostly performed music from the 1920s and 1930s, saying she loved old music and silent movies,and that she had heard many of the songs on her father’s Gramophone, which was positioned stage left throughout the evening.

Singing and playing both a grand piano and a vintage upright, Krall was a combination of raconteur, comedienne and musician. Saying she had chosen the music from her father’s 78 rpm record collection, she referenced her Canadian childhood, her marriage to Elvis Costello and their twin sons. This flat-out autobiographical excursion was part of a nationwide tour for her new album, Glad Rag Doll (Verve, 2013).

Krall, 49, may have surprised most of the 1,570 listener in the sold-out house with this highly different format. But, after almost stunned early non-response, they began to cheer each change of pace. There was plenty of good jazz and lots of her trademark husky vocals in this unconventional musical mix that added western swing, rockabilly and folk music.

Most surprising, and maybe off-putting for jazz purists, was the continuous backdrop projection of silent film footage. Each song was accompanied by its own film clip, starting with various facial expressions by modern film star Steve Buscemi portraying a carnival-barker reacting to the quirks of fate.

At first it felt as if Krall was working a Lady Gaga-style idiom of constant surprise elements. Then everyone seemed to settle in to enjoy the aural and visual combination that was playful, effervescent and joyous. Besides, Krall could sing the phone book and people would love it.

In this “box of chocolates” show, Krall’s song list ranged from favorites from her early idolsNat “King” Cole and Fats Waller to songs by Bob Dylan, Tom Waits and Joni Mitchell. Then she sang Gene Austin‘s “Let It Rain,” describing it as the “Bridge Over Troubled Water” of that generation, a reference to the 1920s Texas drought. She followed that with Waits’ “Temptation.”

Performing with her were gifted guitarist Anthony Wilson, who is a colleague from her earlier career years, as well as exceptional acoustic bassist Dennis Crouch and inventive drummer Karieem Riggins. They were abetted by electric pianist/B3-whiz Patrick Warren and Nashville-based guitarist Stuart Duncan, who also excelled on electric fiddle and even made a ukulele sound jazzy.

The band left the stage for solo Krall, who moved to a swivel stool at the upright and asked for audience requests. Multiple titles were called out, including “O Canada” and a Costello hit, but she chose “Peel Me a Grape” (of course), injecting stride and boogie-woogie elements, adding a fragment of the Canadian national anthem. She performed her new CD’s title track, then segued into Mitchell’s “A Case of You.” The rollicking fun of Waller’s “Your Feet’s Too Big” and “I’m Gonna Sit Right Down and Write Myself a Letter” was contrasted by a modern spiritual, “Wide River to Cross.”

Then came more switch-ups, from the upbeat “On the Sunny Side of the Street” and “Just You, Just Me” to a sultry treatment of “Boulevard of Broken Dreams” and the 1960s rockabilly-soul of Betty James’ “I’m a Little Mixed Up.”

Even after nearly two hours, the audience wanted an encore, and was rewarded with three. Dylan’s 1970s “Wallflower” was followed by the standard “Exactly Like You,” Krall closing the concert with Jimmie Rogers’ “Prairie Lullaby” that she said she sings to her twin sons at bedtime.

Then she walked over to the Gramophone, put the needle on a 78 rpm record to play “Now is the Hour” and vanished stage right. This continually surprising and thoroughly satisfying concert kept people talking about it in the arts center’s parking lots.