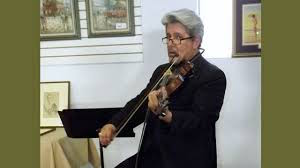 An expanded repertoire and new personnel have evolved from Devon Bridgewater’s original Nuance trio, launched 25 years ago to become an esteemed jazz-swing ensemble. The New Nuance embodies freshly diverse and buoyant sounds to represent all that jazz was and still is, performed by a well-honed trio of veteran Phoenix musicians.

As the leader, Bridgewater continues to confirm his exceptional triple skills on violin, trumpet and flugelhorn, also writing arrangements of vintage songs for the honed expertise of Eric Bart on guitar and Ted Sistrunk on acoustic bass.

The trio launched a recent evening concert with “Favela,” a lesser-known 1960s chart by Antonio Carlos Jobim. It was a refreshing change from the usual standards chosen to memorialize the prolific Brazilian composer.

The seldom-heard Kenny Dorham hit “There Goes My Heart” was introduced by Bridgewater noting, “We play what most musicians don’t.” He chose the flugelhorn for this 1960s jewel from Dorham’s “Matador” album with Jackie McLean. A change of

Another 1960s Jobim chart was the intriguing “Look to the Sky” from his “Wave” LP that featured Bridgewater’s agile flugelhorn voicings and Bart’s inventive expressions. A focus on the gypsy jazz of the Quintette of the Hot Club of France was sparked by the Bridgewater-Bart coalition fueling a lilting melody line.

“Moonglow” was a hit with the multi-generational concert audience at The Nash in Phoenix. Composed in 1933, the chart was rejuvenated by Artie Shaw in the 1940s, rebirthed in the 1955 film “Picnic,” this night delivered by the trio in a melodically subdued swing mode.

The second set opened with the catchy Nina Simone hit “My Baby Just Cares for Me” that brought smiles to listeners’ faces. Bridgewater chose his trumpet for a samba version of “Nothing Ever Changes My Love for You” that featured Sistrunk smoothly walking the bass frets. The jazz waltz “Emily” was an effective change of mood, guitarist Bart conveying its lovely lilt via extended solos and a singular finale that resembled a soliloquy. The concert ended with Wes Montgomery’s energized “The Thumb,” so titled because the late guitarist defied standard playing style by using his thumb instead of a pick.