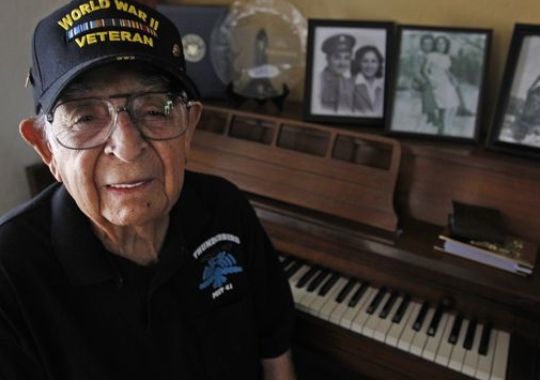 “Chapito” Chavarria Orchestra Musical Instrument Museum Phoenix, Arizona April 6, 2014 A 10-piece band of Phoenix-area musicians performed a concert celebrating the 100th birthday of longtime bandleader Rafael “Chapito” Chavarria. The musician, composer and arranger attended the event, which included the dedication of a new segment of the “I Am AZ Music” exhibit at the Musical Instrument Museum. The display that honors him as one of Arizona’s cultural treasures features two of his instruments, hand-written charts, 45 rpm records and music-video clips. The tribute band’s musical director, Devon Leal Bridgewater, was a Phoenix high school student when he began playing with Chavarria in the 1970s. He pored over musical charts with the leader to reconstruct his arrangements and assembled the band. The lead vocalist was Ray “Gumbi” Salazar, 65, who was five years old when he danced in front of the band as part of its “floor show.” The outdoor performance was a mixture of ballads and up-tempo charts, including the Mexican song “Perfidia” that became a 1940s jazz standard. The repertoire ranged from Mexican and Cuban mambos, cha-chas, boleros cumbiasand rancheras to American swing and jitterbug music. The courtyard was filled with people of all ages and ethnicities, many of whom danced to every selection. The three-trumpet front line delivered bright harmonies, Rod Larkins on lead trumpet, aided by Bill Maley and Bridgewater, who doubled on violin. Tenor saxophonist Larry Munoz was a featured soloist on many of the charts, along with a second vocalist, Ernie Garcia. The rhythm section featured Paul Lubben on electric piano, Felix Sainz on electric bass, Robert Scott at the drum set and Tony Valenzuela on percussion. A similar concert was performed in the museum’s theater in September 2013 to celebrate Chavarria’s 99th birthday, occurring a few weeks after the death of his wife of 73 years. During the World War II era, Chavarria led bands at the elegant but racially segregated Calderon Ballroom and Riverside Ballroom, where separate nights were designated for Hispanics. The bandleader’s songbook combined popular Mexico City of the 1940s and 1950s with American swing. Chavarria was a World War II veteran and a co-founder of the American Legion Post 41 in Phoenix, where his band regularly performed. He performed during four decades, often for the second and third three generations of families at birthday, wedding and anniversary parties. He became such a star in the Latin community that couples would plan their weddings around his availability to play at their receptions. Even after he decided to retire in the 1980s, he still played occasional dates for two more decades before actually retiring 10 years ago. Among the speakers saluting Chavarria before the concert were Mexican consulate general Roberto Rodriguez, Arizona native Joanne Goldwater (daughter of the late Barry Goldwater) and Cullen Strawn, the museum’s curator of musical instruments. Just before the music started, the man nicknamed “Chapito” (Spanish for “shorty”) spoke in a strong voice to the crowd, recalling his years in music. “I’m self-taught, but the Lord gave me this talent. It’s been a wonderful life and a lot of years, but people remember and they still love this music.” He left school after the seventh grade to work in the agricultural fields surrounding Tempe, then for a cotton ginning company. At the age of 16, he jumped a train to Los Angeles, where he lived with uncles and heard a wider Latin musical culture, American jazz and big band music. He learned to play banjo and began performing with Olvera Street musicians, then played bass in L.A. nightclubs and later at the Arizona Biltmore Hotel in Phoenix. Chavarria was self-taught for playing and arranging, first learning violin then string bass, then electric bass. He said he played violin with my father’s band group starting in 1923 at the age of 9, playing Sunday at afternoon parties calledtardeadas. The “Chapito” renaissance was launched by Paige Martínez, a documentary filmmaker whose work has been shown on PBS. Martinez wanted to tell the story of a man who was born in Solomonville, a small ranching and farming community in Graham County, only two years after Arizona became a state. She set up a crowd-funding site to help finance her documentary, “Chapito!” and showed clips of it in the museum lobby. The premiere is scheduled for September at the Herberger Theatre in Phoenix.