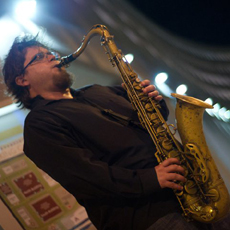 Tenor saxophonist Andrew Gross knows what it’s like to be a student-member of the Young Sounds of Arizona big bands: He was in the bands in 1995-96, before enrolling in the jazz studies program at Arizona State University.

He then moved to New York City to continue his jazz studies at the prestigious William-Paterson University in New Jersey, and from 2002-2005 at the New School University in Manhattan, where he earned a bachelor of fine arts degree and studied with bassist Reggie Workman, saxophonist Jane Ira Bloom, trumpeter-arranger Charles Tolliver and avant garde saxophonist Dewey Redman.

Concurrently while in his 20s, Gross performed with his own bands in New York’s jazz clubs, including Sweet Basil (now Sweet Rhythm), Smalls Jazz Club and Fat Cat Jazz Club. He also was chosen to perform at Birdland with the Reggie Workman Ensemble that featured special guest Joe Lovano.

Returning to Arizona in 2006, Gross earned his master’s degree at ASU while actively working as a professional jazz musician, private teacher and clinician. He recently was named as assistant to Vince Wedge, music director of Young Sounds who leads the 7:00 band; Gross is working with the 5:00 band. Both ensembles will perform at 7 p.m. Wednesday Dec. 3 as part of a concert featuring both the Mesa Community College Jazz Band and Jazz Fusion Band; admission is $10 ($5 students) in the Mesa Community College Performing Arts Center, 1833 W. Southern Ave., Mesa 85202, 480-461-7887, www.mccpac.com

Gross vividly remembers his student-musician years, and he talked with MusicSceneAZ about the influence and positive effects of Young Sounds of Arizona on his career.

MusicSceneAZ: How was it different being in Young Sounds of Arizona compared to jazz band in high school?

Gross: In the high school jazz band, there was always a number of members committed to playing the music, but in Young Sounds, there was an opportunity to play with whole group of committed students. Expectations for us were quite high, and everyone was expected to have a certain level of ability, which allowed us to rehearse and perform more challenging music. (The YSA director then was Milas Yoes, now Phoenix College’s coordinator of Instrumental Music, Jazz Studies and Humanities. Other members of Young Sounds at that time included pianist Rachel Eckroth, bassist Justin Brotman, drummer Chad Eisinger and trombonist Ben Finberg, all of whom have pursued performance careers; Eckroth currently is part of the band for the Meredith Viera Show that airs at 11 a.m. weekdays on KTVK Channel 3.)

MSA: What was most important about your experience in Young Sounds of Arizona as related to your professional career?

Gross: Young Sounds was acommunity of musicians that I wouldn’t have had otherwise. It was integral in helping me decide to become a professional musician. I made friendships and alliances, and we worked together playing in clubs like AZ Jazz on 19th Street off Camelback Road, a regular gig where we played standards. Those relationships had an impact on my life further down the road, and I reconnected with Ben Finberg in Boston while I was in New York.

MSA: Tell us about your 5:00 band and what it’s working on to perform.

Gross: The 5:00 band is 10 members, and some are students that I teach privately or they’re from ensembles that I teach. We’ve just started, so we’renot playing charts at this time. I’m exposing the students to a way of learning music by ear, which is how jazz originally was learned. Jazz is a very difficult music to play, and students identify more with pop music, which is easier to digest and to learn. So the 5:00 band is learning Stevie Wonder music. I’m teaching “Isn’t She Lovely?” to them without written music, and also “Don’t You Worry ‘Bout a Thing” (from Wonder’s 1973 “Innervisions” album), and Ray Lamontagne’s “You Are the Best Thing” that’s classic 1970s rock.

MSA: How did you decide to use this approach with the 5:00 band?

Gross: I believe students have better grasp of music by learning it by ear. In the high schools, most jazz programs are tied to written music. When I was in high school jazz band, I learned my part and my solos, and listened to the arrangement. In that process, a student gets to know his or her own part, but not the whole package of experiencing all the parts and knowing what everyone else is doing. I teach the 5:00 band all the functional parts of the music by, for example, having them sing the bass line to understand the inner voices of the harmony. I want them to be able to sing the melody while other parts like the bass line and harmony parts are being played, and also to be able to sing the melody while the bass part is underneath the ensemble.

MSA: Are there guidelines of conduct and attitude that members of Young Sounds of Arizona must follow?

Gross: The best guidance is by example, showing how to be nice and considerate, and to feel the community. It’s showing that they’re not out there on their own, that they’re being supported, and that they’re being asked to support the other band members. It’s important for them to be good people, above and beyond just playing music. The people I work with that make the biggest impression are the easiest to work with; you can be a good person in a situation that can be stressful.

MSA: What was it like living and performing jazz in New York City?

Gross: In addition to playing in clubs with my band, I was selected to play in the Reggie Workman Ensemble at Birdland, played with the band of trumpeter Butch Morris at jazz festivals, also with drummer Andrew Cyrille, and I did some studio recording work. I got into a lot of “free music” with Butch Morris, completely improvised – we’d have two lines and play for 30 minutes. That was different from what I was exposed to originally, the late 1940s and ’50s bebop of Charlie Parker, Sonny Stitt and Dizzy Gillespie. As I progressed, I was interested in many kinds of jazz, and now I’ve come back full-circle. Part of the mystery of the New York clique is that there weren’t like-minded people who were open enough to entertain a variety of styles in their paradigm; there was a sense of tunnel vision for what they do. For me, jazz was not one thing, so I came back to Phoenix where I believe there’s more variety and better opportunities in performing and education.

MSA: Where might jazz fans hear you perform right now?

Gross: I’m mostly teaching, but I’m finding time to perform. I’ve worked at Sacred Grounds and The Nash, and I’ve played in the Phoenix Symphony Pops Band. I’m playing for weddings, and I’m in Dmitri Matheny’s “The SnowCat” shows (Dec. 6 at ASU Kerr Cultural Center in Scottsdale; Dec 13 at Chandler Center for the Arts). Last year I was in Fred Forney’s Arizona Jazz Masterworks Orchestra, and I used to play at Bobby C’s in the Chicano Power Revival (CPR) band (led by keyboardist Raul Yanez). I teach at Music and Arts, a private music studio in Glendale; also at the Phoenix Conservatory of Music that is a college-prep school for Berklee College of Music in Boston. I also do clinics at the Highland High School jazz festival, the all-state jazz auditions and the Arizona Band and Orchestra Association (ABODA) jazz festival.

FootNote: Young Sounds of Arizona was created in 1971 by the Phoenix Musicians Union, Local 586 AFM, which has continuously sponsored the youth bands. The union also presents local musicians in free concerts on the first Tuesday of each month, open to the public in the comfortably cozy Vic Kottner Music Hall, 1202 E. Oak St., Phoenix 85006, info 602-254-8838.