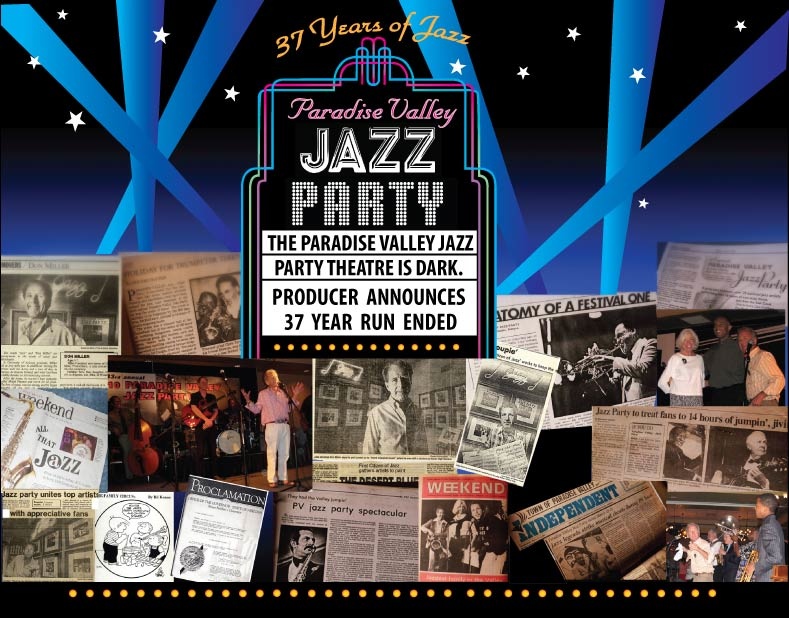 An A-team of East Coast, West Coast and Arizona musicians played a mix of swing and bebop sounds in 14 jam-session-style sets at the 37th annual Paradise Valley Jazz Party. A special element at this party was the contrast in ages among the 23 musicians.Melissa Aldana is a 24-year-old New York City tenor saxophonist, and Los Angeles vocalistMelissa Morgan is 29. They were booked to perform with veteran jazzers such as pianistRoger Kellaway, 74; trumpeter Lew Soloff, 70; and tenor saxophonist Bill Easley, 68. But jazz tradition defied the age differences, everyone playing the timeless music that has captivated fans for more than 100 years. The party’s peak was a trio set led by pianist Kellaway, whose phenomenal technique and colossal creativity illuminated his swing, bebop and stride sounds. He created melodic excitement via contrapuntal moves and tempo changes, frequently punctuating with intentional dissonance by plunking his right forearm on the keyboard. He delivered rivulets of notes for his solo soliloquy of “In My Solitude.” Then he turned fiery in double-time on “Don’t Get Around Much Anymore.” He was inventively complemented by Bruce Forman, a skillful bebop guitarist who’s adept at picking up a piano phrase or note to carry the riff further; and bassist Rodney Whitaker, who dug deep into his rhythm task and also excelled during his solo spots. Another high point of the weekend was a Kellaway set with Aldana, who is Chilean-American and the first female instrumentalist to win the tenor saxophone honor in the 2013 Thelonious Monk Institute of Jazz competition. Kellaway’s extravagant elegance vividly contrasted with her behind-the-beat delivery mode and improvisations in minor modes. Aldana played deeply thoughtful solos, never succumbing to the penchant of younger musicians to play too many notes. Saturday’s opening group set the bar high for the evening and the next afternoon, led by trombonist Wycliffe Gordon, sharing the spotlight with Brazilian-born Claudio Roditi on trumpet and flugelhorn. Roditi played rotary-valve horns with the tab-key mechanisms of French horns, plus curvier tubing and wider bells that produced a warmer sound than regular brass horns do. Gordon also played a small soprano trombone that replicated the crisp, high trumpet range, and brought exciting contrast into their duet segments on “Perdido” and “Caravan.” West Coast pianist Bill Cunliffe contributed a number of artful solos, often sparked by Latin elements. Tenor saxophonist Easley’s happy on-stage demeanor, including dance steps, personified joy that filled his solos and comp work. Portland, Ore., bassist Tom Wakelingdelivered sophisticated warmth and inventive solos. Phoenix native son Lewis Nash returned from New York to play two Sunday sets, pleasing the audience with his elegant and melodic style, particularly his cymbals component and, of course, his unique scat-vocal segment. The party included two singers, Australian-born bassist-vocalist Nicki Parrott, who played years of Monday nights with guitarist Les Paul at the Iridium in New York City; and Morgan, who recently moved from New York to the West Coast. Parrott’s rich acoustic bass tone and her alluring vocals were an impressive combination. Morgan, a statuesque Filipina-American, has a wide vocal range, but at times her high notes tended to be nasal; her two sets during the party were the only ones using written charts, limiting improvised instrumental solo opportunities. Drummer Herlin Riley delivered the infectious second-line/cakewalk rhythm of the street parades in his native New Orleans, occasionally injecting hand-drumming and tambourine-shaking. Clayton Cameron, a party first-timer who has been Tony Bennett‘s drummer, gained new fans for his stylish brushes work and power-filled solos. The Sunday session was launched with a lively set by guitarist Forman’s Cow Bop, a clever merger of western-swing and bebop in Bob Wills-Milton Brown-style. The premise is entertainment, but the talent is deep-seated in the jazz idiom. The leader’s solos borrowed from Charlie Christian and {{Django Reinhardt}, and “Pinto Pammy” Forman’s bell-clear voice became a twang when appropriate. Dual reedsman David Wise’s inventive baritone and torrid tenor sax licks were solidly supported by slap-bassist Alex Frank and drummer Jake Reed, all three of whom also played in two other sets.

Four Arizona musicians joined the touring stars. Two pianists were Armand Boatman, 76, who dazzled new ears with his ability to deliver Oscar Peterson elements imbedded within his stylish sounds and amazing agility; and Michael Kocour, jazz studies director at Arizona State University, whose solos sparkled with bright riffs. Tenor saxophonist Jerry Donato demonstrated relaxed depth in combos, combined with his dual ability to create fiery solos and caress a ballad. Tucson’s Pete Swan was a potent percussionist in swing and bop, and Jacob Eary, although still in college, showed he’s a drummer to watch in coming years. A jazz party is an exceptional setting for hearing music. Guests keep conversations to a minimum, and the musicians don’t have to deal with extraneous noise because drinks and food are obtained outside the performance area, not served and cleared by wait-staff. The personnel lineups change with each set, with the leader choosing the songs. It’s a no-charts opportunity for improvised jazz, creating the aural excitement of “arrangements while you wait.” A jazz-party perq gives audience members opportunities to meet musicians between sets in the ballroom, green room or hotel restaurant, rather than needing backstage passes. The annual party has been produced since 1978 by 82-year-old Don Miller. This year, a group of supporting sponsors donated funds to either the jazz studies program at ASU or to The Nash, Jazz in Arizona’s performance-education center in Phoenix.